TheDonald
Communities Topics Log In Sign Up
Sign In
Hot
All Posts
Settings
Win uses cookies, which are essential for the site to function. We don't want your data, nor do we share it with anyone. I accept.
DEFAULT COMMUNITIES • All General AskWin Funny Technology Animals Sports Gaming DIY Health Positive Privacy
1149

“'He just wanted to be with him': Older brother of US Marine who was killed in suicide bombing at Kabul airport during chaotic American withdrawal kills himself at memorial for the soldier 1 year later”; Their mom “blames Biden for her son's death & said was due to a failure to plan the withdrawal” (media.patriots.win)                I  DID  THAT
posted 113 days ago by Vsid 113 days ago by Vsid +1151 / -2 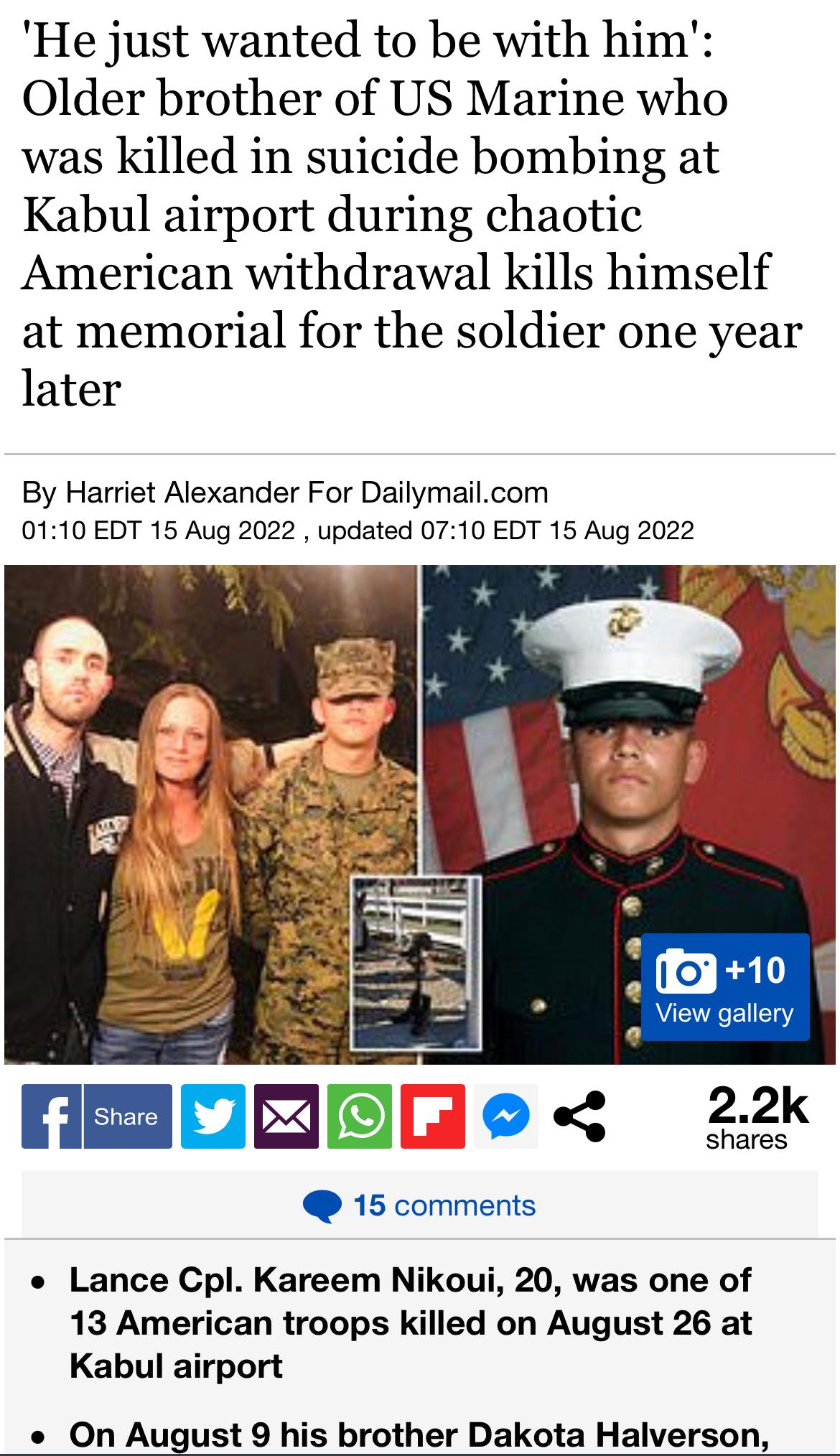 The poor mother. Both boys gone. Very sad for her.

Can you imagine being one of the parents and seeing that fuck check his watch over and over? Wish one of the fathers would have went up to him and smashed his fucking head in while yelling “you got somewhere to be fuck head?”

"Let me help you get there" neck snap

Very sad. Condolences to the family.

Hey! What about Biden's son who was a veteran...and DIED!!

That's horrible. God be with the family

Damn man... I can only imagine what that family is feeling right now.

This just makes me more and more angry.

I don’t blame Biden for the brother’s suicide. It’s sad shit indeed, but who’s to say the brother wouldn’t have killed himself anyway. Lots of families needlessly lost someone in the Cheney/Bush Forever Wars, and an overwhelming majority did not commit suicide. The kid was obviously distraught, but chances are that the day his brother was killed for nothing wasn’t the day his mental problems started. The poor mother :-(

The blood is on Biden’s hands.

Dear mom: I pray for you and apologize on behalf of the Manchurian Candidate and his puppeteers who helped kill your sons 🙏

Those names are super suspecious.

Kareem Nikoui doesn't sound like someone that Halverson calls family.

yeah, I'm not that close with my full brother. Can't image what a half brother relationship is like.

The few, the proud, the an heroes.

And ZERO apologies or attempt to comfort the families from Biden.

Trump would have been there for them.

In hell? ughhhh his poor family

I believe the brother killed himself at the Marine Corps Memorial in DC. If true, this story is probably the saddest thing I've ever heard.

This is absolutely horrible & heartbreaking.

RIP to both amazing men as well as the others who were killed.

I really don't think people should join the military at all anymore. The modern day USA does not seem to be worth fighting for especially with Anti-American criminals in charge of it like that leftist pussy Mark Milley.

How about you blame BUSH and CHENEY instead

Bro wtf dont end yourself because faggot biden fight for freedom to honor your brothers.

Wonder what the Biden death toll is between this, J6 suicides, and people who lost everything from lockdowns (suicide or OD). Egregious.

Someone needs to be charged.

Unless you are in severe physical pain or stuck on some remote island most likely about to die or been hurt physically on the head to where you are mentally challenged or were under the influence of a drug that for but a moment caused you to think irrationally then it's going to be considered a sad thing . However To commit suicide is the epitome of a loser and a coward for anything else.

You do not kill yourself because you are sad, or angry at the world. No suicide outside of self sacrifice for another should be given respect.