TheDonald
Communities Topics Log In Sign Up
Sign In
Hot
All Posts
Settings
Win uses cookies, which are essential for the site to function. We don't want your data, nor do we share it with anyone. I accept.
DEFAULT COMMUNITIES • All General AskWin Funny Technology Animals Sports Gaming DIY Health Positive Privacy
939 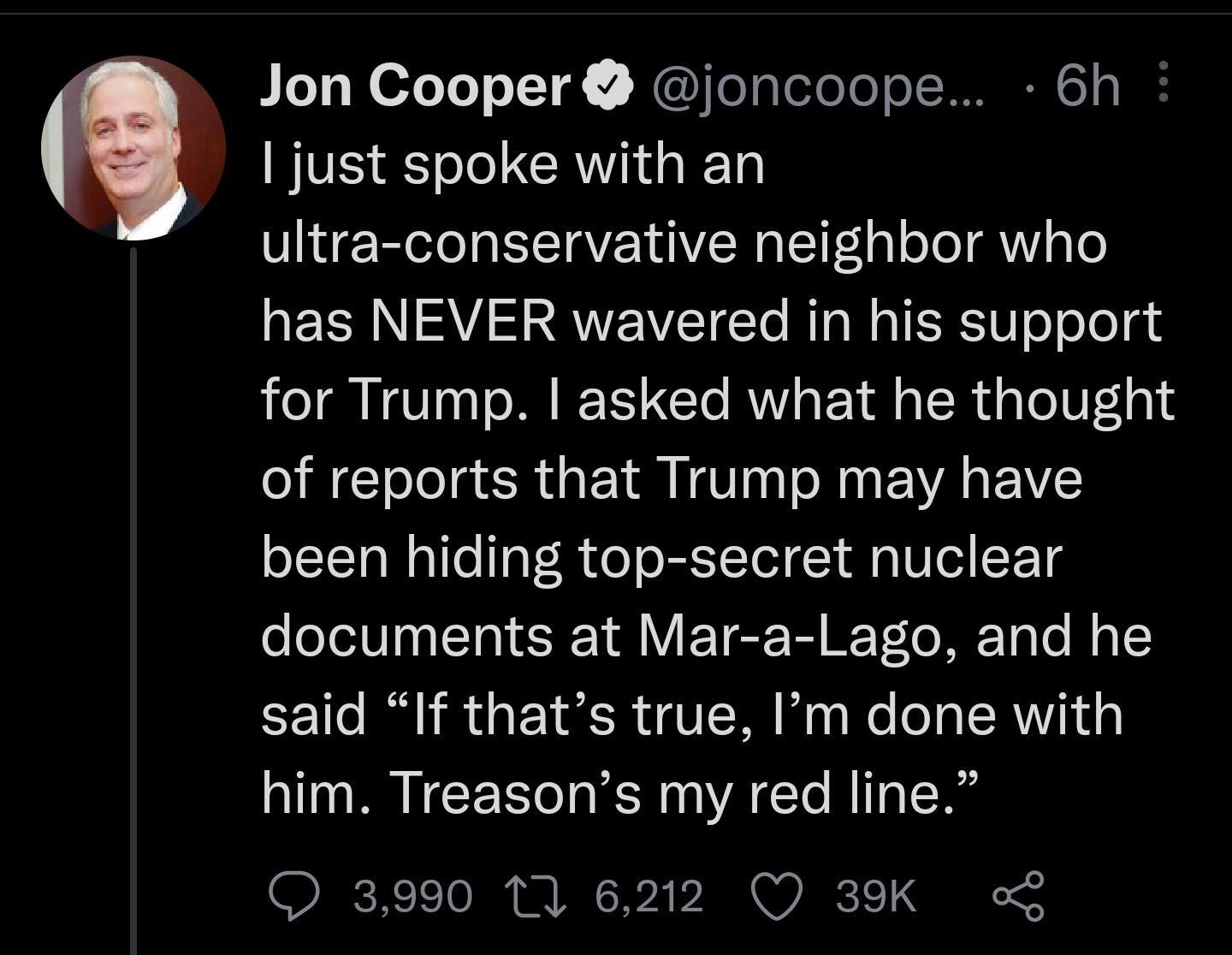 Treason is my red line too. the democrats have been committing treason for decades.

I just spoke with an ultra leftist neighbor. I asked why he thought he was a woman. Haven't seen him in days now. Wonder what happened.

Just hang in there, they’ll swing around soon

Ultraconservative = Debated whether he'd get his 10th booster this week or put it off until next week since he was still sore from his wife's boyfriend's visit.

As if they would live near or tolerate a Conservative.

Exactly. These leftist ideologues wouldn't even speak with anyone they even suspected of being slightly conservative.

This is a real thing.

Unfortunately they do live near conservatives. I wish they'd all stay in cities, but their dumb ass policies push them to move to "cheaper" (conservative) areas. Then they just keep voting their same dumb ass ways.

hahaha they always have a neighbor with a red line

As if that neighbor would not already know that anything being reported by the FBI or MSM is complete and total bullshit.

The fantasy stories these idiots come up with to virtue signal are hilarious.

omg this is delicious, they really are trying to run with the nuclear secrets thing

There's no limit to how stupid you can be when your life depends on it!

Swing from pines u commie scum

Chinless faggot is full of shit.

Pedes it's true. Trump took top secret nuclear documents and that's why the FBI hasn't arrested him yet like everyone else who stole top secret documents. It all makes sense!

Well lets see, for the last 6 years and more they called him a Russian agent and that he was elected by Russia to help them gain power, the media have and to this day still push similar bullshit, anyone who claims to have never wavered in their support of Trump would be fully aware of this and know that anything and everything the media claims is crap. For that to change all of a sudden makes absolutely no sense.

Oh what's that, the FBI are claiming for the upteenth time that Trump did something bad again? Well I didn't beleive them all those other times and all were proven to be false accusations, but this time they must be telling the truth.

Also funny how every single leftist manage to simultaneously live in cities which are overrun by them worse than the rats which inhabbit them to but every day claim to find a MAGA individual who says that the latest allegation is the last straw.

Lol then a unicorn carrying a leprechaun came galloping by being chased by Bigfoot.

For being lying pieces of shit, they sure are bad at it.

These “I just spoke with my ultra conservative _______” tweets are among my favorites. Very entertaining.

That’s not how nuclear codes work. This guy is showing how retardant both he and his ultra gay neighbor are. Those codes are changed, sometimes daily. Trump can’t just call up Jim-Bob stationed in a silo in New Mexico and spout off some codes that launch an ICBM. There are specific controls, input sources and protocols that matter

Libtards aren't capable of having a reasonable conversation like that.

Once again, why do these photographers ALWAYS make their subjects look like they have ped0gheyface?

Why do these scumbags always go over the top with their lies? I can believe the story more if was a mild Trump-supporter.... but an ultra-conservative Trump loyalist?

Jon Cooper is a liar, and, an obvious one at that.

I don’t believe this nuke shit for a minute.

What an idiot, nobody believes him lol.

That’s my red line too, that’s why I love helicopter memes.

Very likely didn't happen, but is still possible. However, Trump didn't have nuclear codes, so even then this hypothetical ultra-conservative would have no reason to stop supporting Trump.

Jon Cooper doesn't have any friends that he speaks to, much less conservative friends.

Well shit. Since this faggot made up a story I guess I'll stop supporting Trump!

Ultraconservative, but hasn't yet learned all the hoaxes committed by fake news and FBI over the past 5 yrs?

What a lying fag

Oh they’re going back to this shill tactic? Any normal person wouldn’t give a fuck about this. But of course its the lefties way of thinking “ oh , if X who is like me stops supporting Y then I guess ill stop too?” Retards.

Lmao said no one ever

Sure, and then everyone clapped

lel! All their fake stories are the same. It's just a copy of some post legitimately made in the early 90's.

Look at that face. Would this total faggot lie?!

This guy is such a party dedicated faggot.

Cooper is a leftist political hack with a history of ridiculous lies.

I don't know one Trump supporter that actually believes this nuke nonsense after all the other FBI BS.

His conservative neighbor just happens to be Rachel Madcow.

This exact tweet could have been posted five years ago when they started the Russian collusion story. But this time it's different!

Yep totally not true because a reasonable person understand they have lied several times about him and this is just another one of them. They are literally throwing shit at the wall to see what sticks untill he is guilty of something so he can't run. They may get him for jaywalking tho.