TheDonald
Communities Topics Log In Sign Up
Sign In
Hot
All Posts
Settings
Win uses cookies, which are essential for the site to function. We don't want your data, nor do we share it with anyone. I accept.
DEFAULT COMMUNITIES • All General AskWin Funny Technology Animals Sports Gaming DIY Health Positive Privacy
2429 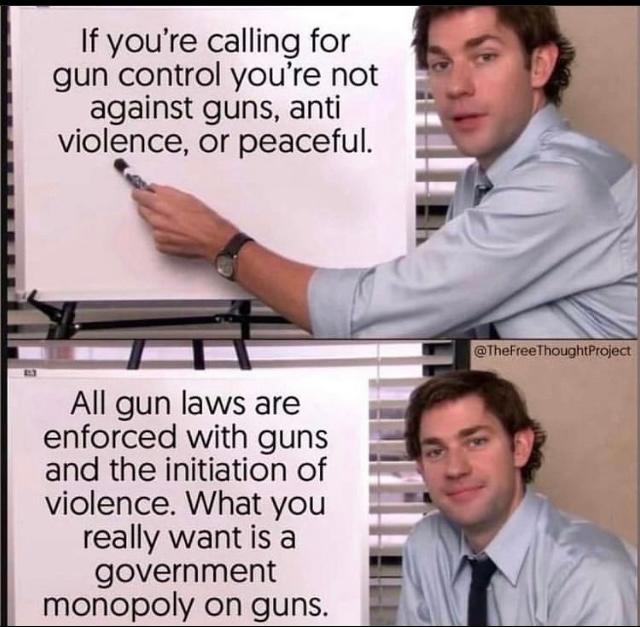 After Uvalde, how can ANYONE think only the government should have guns?

Their argument goes that the police were unable to effectively intervene because the weapon the shooter had was so powerful, and that there would be less need for violent policing with a disarmed populace.

They are wrong, and even if it were true this line of argument does not justify infringing on our natural rights, but it's important to understand the best version of your opposition's argument's and not just dismiss them as stupid.

As a former US Army Infantryman I often forget that the gen pop is dumb about weapons. A high caliber pistol is way more effective in close quarters than an AR, but maybe the NPCs don't know that.

So I simply point out that parents tried to run in, unarmed.

Also pictures have shown that the police had at least 2 AR rifles, body armor and 2 ballistic shields early into the event but waited another 30-40 minutes to "breach" an unlocked door.

Waiting out their time for their 20 year retirement and benefits.

They're not there to risk their lives, which is why they are only willing to persecute law abiding citizens.

Kyle was pretty good in close quarters with his AR.

Why did this honest post garner down doots? There are faggots amongst us.

Kyle was very impressive, but he was outdoors. Close quarters indoors is a whole different thing, limited range of motion, turning radius with a rifle becomes a concern etc.

Good point. What do you think of Krav Maga? https://en.wikipedia.org/wiki/Krav_Maga
.
.
Redpill videos and info here:
https://patriots.win/p/15HIhWzTCT/

What about a bullpup rifle? Seems like it would excel in close quarters without sacrificing any long range power.

They aren’t stupid. They are evil.

Madeleine Albright says 500,000 dead Iraqi Children was "worth it" wins Medal of Freedom

The stupid ones believe gun control arguments coming from people who have engaged in mass murder from Waco to Iraq—a that’s just recent history.

I always point out that there are a bunch of ways for children to die. Car accidents, suicide, shootings, drug overdoses, genocide.

Statistically you're more likely to die of a lightning strike than a mass shooting.

This was true of terrorism as well, but it didn't stop us fighting a 20 year unwinable war against the concept.

Definitely more likely to be killed by your Own government.

That's because the Cabal wanted to make money on weapons:
https://patriots.win/p/15HIhWzTCT/

WHY DID THEY STAND DOWN. If it were one of my kids in there, there would have been two active shooters. Uvalde TX taxpayers, I'm sorry.. your tax dollars have been paying cowards. Maybe the left was right about defunding the police... if they're not going to be there to protect the most vulnerable, it's time we go back to posse.

If it were one of my kids in there, there would have been two active shooters.

The fucked up part is that Uvalde police would have shot you without hesitation, but they didn't feel like taking down the actual shooter.

We will turn in our bullets at a thousand feet per second.

1776 will commence again if you try to take our firearms!

Hmm, I dunno. I’d like to believe that but we are unable to organize as all major communication is in the hands of the enemy. Also we are too comfortable.

The government has heavily fortified itself against a violent revolution with its domestic spying apparatus and willingness to infiltrate nearly any group that attempts to organize.

Our revolution will have to be ideological in nature, and that is why the Jan 6 "insurrection" is so scary to the establishment. It's not that they thought some rowdy protestors would physically overthrow an illegitimate government, it's that it showed how much awareness and agreement there was that this government is illegitimate.

While force is their modus operandi, their basic and long-run problem is ideological. For in order to continue in office, any government must have the support of the majority of its subjects. This support, it must be noted, need not be active enthusiasm; it may well be passive resignation as if to an inevitable law of nature.

Many of us are past the basics. The American spirit still runs deep. Pop off point hasn't happened. Many will have your 6. Train and prepare fren. Buy and train with PVS14s if possible. Become the goon, embrace the founding fathers. The spirit isn't dead.

Unable to organize? Large-scale, perhaps. However, if you don't have a group of like-minded individuals that you meet with at least semi-regularly, who have similar views to you, who are prepared to aid each other in whatever struggles may come, you are behind the curve. Just remember to not have cell phones around when you speak about the really important things.

And before guns were invented, dictators took swords away from people. Japanese emperors often engaged in sword confiscation to prevent uprisings from angry peasants.

And I'm here to tell you:

1776 will commence again if you try to take our firearms!

you dont know the end of the quote?

Just to give perspective on this incredible murder by government, if all these bodies were laid head to toe, with the average height being 5', then they would circle the earth ten times. Also, this democide murdered 6 times more people than died in combat in all the foreign and internal wars of the century. Finally, given popular estimates of the dead in a major nuclear war, this total democide is as though such a war did occur, but with its dead spread over a century.

Did those countries even have widespread civilian gun ownership prior to those dictators?

Everything Adolf did was LEGAL! The government passed the laws, and those laws were enforced.

This is why government needs a moral compass like God.

This is why government needs a moral compass like God.

Nazi army had "Gott mit uns" on their uniforms. It means "God on our side". All Islamic theocratic governments also think they are aligned towards God.

God's #1 priority is to let people act out their free will unhindered. And that includes giving people total freedom to define God however however they want, use his name for whatever they want, and make up any religious fantasy they please. Sure God gave commandments, but after that he decided it was more important to remain silent and give everyone the free will to make up their own god/commandments/etc. So here we are.

That's my go to argument whenever anyone asks me why I carry. I guarantee I've send more rounds down range than at least 80% of law enforcement. It usually ends with "you're more likely to have someone like me get to you faster than you calling 911 and getting a government gun to help in time... I don't have to even make the call"

I don’t think whoever made this understands this meme template.

The Constitution is like a “No Guns Zone” sign for conservatives, in that the only people it would bind are those who are already generally honest and peaceable. The ones who would lie or commit harm would simply look at the piece of paper and scoff.

They just want the government to have more power. They are state sycophants.

A government monopoly on guns is specifically why the 2nd Amendment was written.

The founders wanted a militia of all the people, not a standing army that the government could use against the people - which the dems did immediately after their coup, moved troops into DC.

All laws are enforced with guns.

If you don't pay your income tax, IRS agents will show up with guns.

If you stop paying your rent or house payment, police with guns will eventually evict you.

If you refuse to comply with a police officer's demands, that officer may threaten or shoot you with a gun.

If you grow a marijuana plant on your property in states where it is still illegal, aerial photographers will alert police who will show up with guns.

There are no laws I can think of where refusal to comply would not result in being threatened with a gun. Even a trivial matter of non-compliance could eventually be escalated to this "threat level."

> Somewhat related: "Donut Operator" on YouTube had a video showing a man refusing to comply with an officers' request to see his license. He got out of the car immediately, and refused requests to get back in. At no point did the man comply with any request, nor acknowledge any questions. When the officer informed him the license plate didn't match the vehicle, the perp ran because he knew he was going to be arrested for driving a stolen car. He was shot and killed in the ensuing scuffle when he went for the officer's taser, with a babbling passer-by making phone-video with "dindunuffin" commentary (as is the norm in these cases today.)

> The Patrick Lyoya shooting was justifiable, based on the body-cam evidence of the perp violently resisting arrest. (The officer's trial is just beginning, another George Floyd kangaroo-court shitshow: https://www.fox2detroit.com/news/fired-grand-rapids-officer-charged-with-murdering-patrick-lyoya-not-in-court-for-first-hearing ) However: as "red flag" laws and other unreasonable un-Constitutional infringements on our 2nd Amendment (and other) rights become more common, these escalations of force will be applied to reasonable law-abiding citizens and those body-cams will be heartbreaking and damning.

Only military and police should have guns.

I see no lie here

A government monopoly on guns means a caste society. The warrior caste that protects the owner caste so they can exploit everyone else. Not very pro-equity.

Yeah, one minute it's all "ACAB", next it's "only those bastards should have guns".

It's simple. Civilian disarmament would mean they can kill us directly, instead of the slow-boil approach they've been forced into taking. They want us dead - proof being the forced vaccinations for us, but not illegals. They want illegals to replace us because said illegals are already used to being slaves to the state in exchange for breadcrumbs, AND they're too retarded to ever question or notice things. The perfect civilians for their desired Feudalism. Humanity would ultimately have its potential snuffed out forever if they get their way.

barry and mike and their kids are protected by automatic rifles

Let's change the framework of the discussion to that.

"Should we give the government a monopoly on guns", rather than "do we want gun control".