TheDonald
Communities Topics Log In Sign Up
Sign In
Hot
All Posts
Settings
Win uses cookies, which are essential for the site to function. We don't want your data, nor do we share it with anyone. I accept.
DEFAULT COMMUNITIES • All General AskWin Funny Technology Animals Sports Gaming DIY Health Positive Privacy
2523 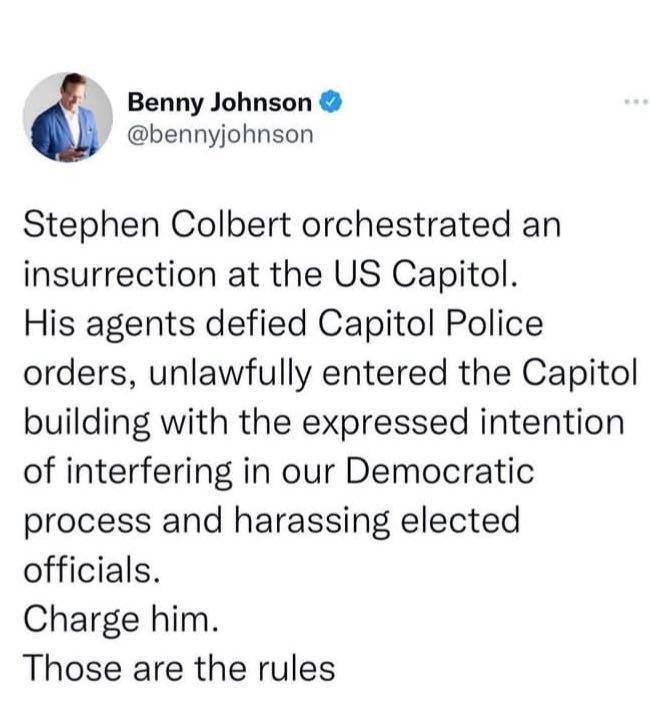 Those are the rules for Republicans. Commie dems don't have rules.

And yet we are still not shooting them in the face

Who's Stopping YOU, tough guy? By all means, be my guest. See how that works out.

It would work out great for the group. Just not the to individual.

There's going to come a time when "the shot heard round the world" will come to fruition!! DON'T BE SUCH A DICK!! We're all on the same side here!! No offense but any reference to star wars, etc makes me wonder about said person with that user name!! Take it easy, maybe you should 420 before you respond!!

Republicans could get away with it. Those are the rules for Trump supporters. They don't care about the other "half" of the uniparty, as long as the money flows, it's whatever.

Don't forget to Red Flag all their guns.

That is exactly what they want. Which I'm not against. But not yet. After mid terms when we are scammed again. Then it must happen or it never will

agreed we are very close to the last box

Don't be hasty, nobody has been charged for J6. You have to arrest them on NO charges, put them in solitary, deny them due process, put them in a facility that is worse than terrorists in gitmo get, forget they exist, then let them waste away...

THOSE are the rules we've established.

Don't forget forced medical experimentation or you are stripped of every single right and reasonable accommodation, beaten by democrat goons, and coerced in to making false and incriminating statements against yourself, or rot in a dark hole.

This is the democrat party in America, 2020 to present day.

They've been charged, not sure what you mean by that. Numerous have made pleas and been sentenced to prison already.

Nope but they've been charged with other crimes. Idgaf about colbert but to say "no one's been charged for (their actions on) j6" is not accurate and spreading that talking point doesn't seem useful.

To be clear though, has anybody been charged with insurrection? Even one person from j6?

Nope. But do you WANT them too? Will that somehow legitimize this thing for you? Do we want the government charging Americans for insurrection/treason/sedition just willynilly? And to be clear, what would your reaction be if someone does end up getting charged with official insurrection charges? You don't have to answer, I know you'll just say they're bullshit made up charges. So if it's all bullshit and all made up, how is "b-b-but no one's been charged with insurrection" mean anything in regards to how we handle future protests. People got arrested. People got charged with crimes other than insurrection. People plead guilty. People have been sentenced with years in prison. Burying our heads in the sand to that fact accomplishes nothing.

Are there other atrocious acts being committed? Yes. Are Americans still being held in solitary without charges? Yes. Should the people responsible be skinned alive? Yes.

What's YOUR point? You seem pissed off and my message was a good launching point for you to get a rant out, even though we both agree about the topic at hand.

Edit: oh I just saw the handshake. Are you in favor of those hearings and punishing j6 protestor? Shill? 🤡?

Young man I remember when you could buy a car with a handshake. Now we've got these peeds and kekkers and anons using it as a slur. Trump shakes hands. I've seen it, you've seen it, we've all seen it. Take my hand brother 🖐🏿 but don't be all limp on me. I wanna feel my tendons grind together. I wanna feel like Paul Revere's horse stomped on my hand when we're done.

No, they are all out on bail

I'm unsure of their current status, but some of those arrested and jailed for Jan. 6th hadn't been charged as of this article:

Jan 6 protesters/trespassers/rioters held in solitary, no bail, some without charges

A year in solitary for his entire team would give us Justice!

Hey, don't forget Adam "Speckle Schmekel" Schiff and Jake "Shekel Toss" Auchincloss who let them in the building and didn't walk them out to the front door when they were finished, which is required protocol.

rhinos will never do it.

The war is over. We lost.

You do not have to add "Those are the rules". It makes the previous assertion look disingenuous. Democrats never add that to their declarations to have us arrested or killed.

Didn't like that either, as it also lends credence to their authority.

HAHA THIS FUCKING FAGGOT WHINING ABOUT "THE RULES" 🤣🤣🤣🤣🤣🤣

THIS IS CLOWN WORLD BRO WAKE UP THE RULES ARE THEY WIN, YOU LOSE

I like the sentiment, but those are not exactly the rules.

The rules are to arrest them and hold them in solitary confinement without charging them or allowing them a bond hearing.

Nice idea, but that presupposes an in-tact Social Contract. We've found in the last 2+ years (at least in an accelerated sense) that we don't have things like "laches" and "standing"

this makes the "A" list of proof the federal government is absolutely defunct and completely void of any authority whatsoever.

Those aren't the rules.

First you arrest them, then you put them in a DC gulag without charging them.

Then you wait at least 18 months before trial.

The rules are that there are no rules for leftists.

It's baffling how many people still act like there are any rules left. There aren't any, it's just like Oscar Benavides said, "For my friends, everything; for my enemies, the law".

There are no rules.

Throw them all in a DC jail for over a year, perhaps closer to 2 years. I thought our constitution said we were entitled to a speedy trial. One of those freedoms we fought a war over.

There is not EQUAL justice. we have two tiers.

But did they have signs and American flags ?

Meh the courts are pretty busy. Better hold him in solitary confinement for 20 months to make sure we are protected from his dangerous motives. I mean wait for trial.

Tbh it would be the smartest thing for democrats to do

That crooked ear needs to do hard time!

Actually the new rules are anything a conservative does is bad and everything a liberal does is good.

Charge him with a million volts of electricity.

He goes to DC jail for over a year and a half without a trial too, right?

Generally curious whether anyone here can admit there is a difference between bursting into the Capitol building, SOME people talking about hurting Politicians, and absolutely not leaving when confronted by police...

and a crew that stayed late to tape some god damn dog puppet videos and immediately cooperated and left when confronted.

I get being upset with Jan 6 people being incarcerated for so long. But man does it kill your whole defense when you are calling for such harsh treatment when you ALL know these two things are not the same.

I have no disagreements with that. I welcome opposing views and I would like to get the actual truth.

Colbert's people having permission to be there at some point "earlier" doesn't mean jack. They were not welcome there when they were apprehended and they knew their welcome had expired.

So, if cops holding the doors open for protesters to enter a building equals "insurrection", why wouldn't it apply when Colbert's people fail to leave restricted areas in the same building?

It's actually not so different at all except... one group wanted to assemble in protest of their government, while the other wanted to make fart jokes.

I agree that they were in the wrong to be there. I think the biggest difference is what happens AFTER being confronted.

From everything I've read so far, Colbert's people basically said "yip, our bad". They WERE detained shortly, since they cooperated, they were let go. This is very similar to the vast majority of people who did enter the Capitol buildings on Jan 6. It's not like EVERY single person was arrested and is being tried. Only those that continued to fight against the police are in that situation. Does that not seem different to you?

Yeah this is another waste of energy. They were permitted to film there but stayed past original allowed time. Bit different than breaking windows and storming the Senate floor.

Save America Rally in Minden, NV

Save America Rally in Mesa, AZ