TheDonald
Communities Topics Log In Sign Up
Sign In
Hot
All Posts
Settings
Win uses cookies, which are essential for the site to function. We don't want your data, nor do we share it with anyone. I accept.
DEFAULT COMMUNITIES • All General AskWin Funny Technology Animals Sports Gaming DIY Health Positive Privacy
1006 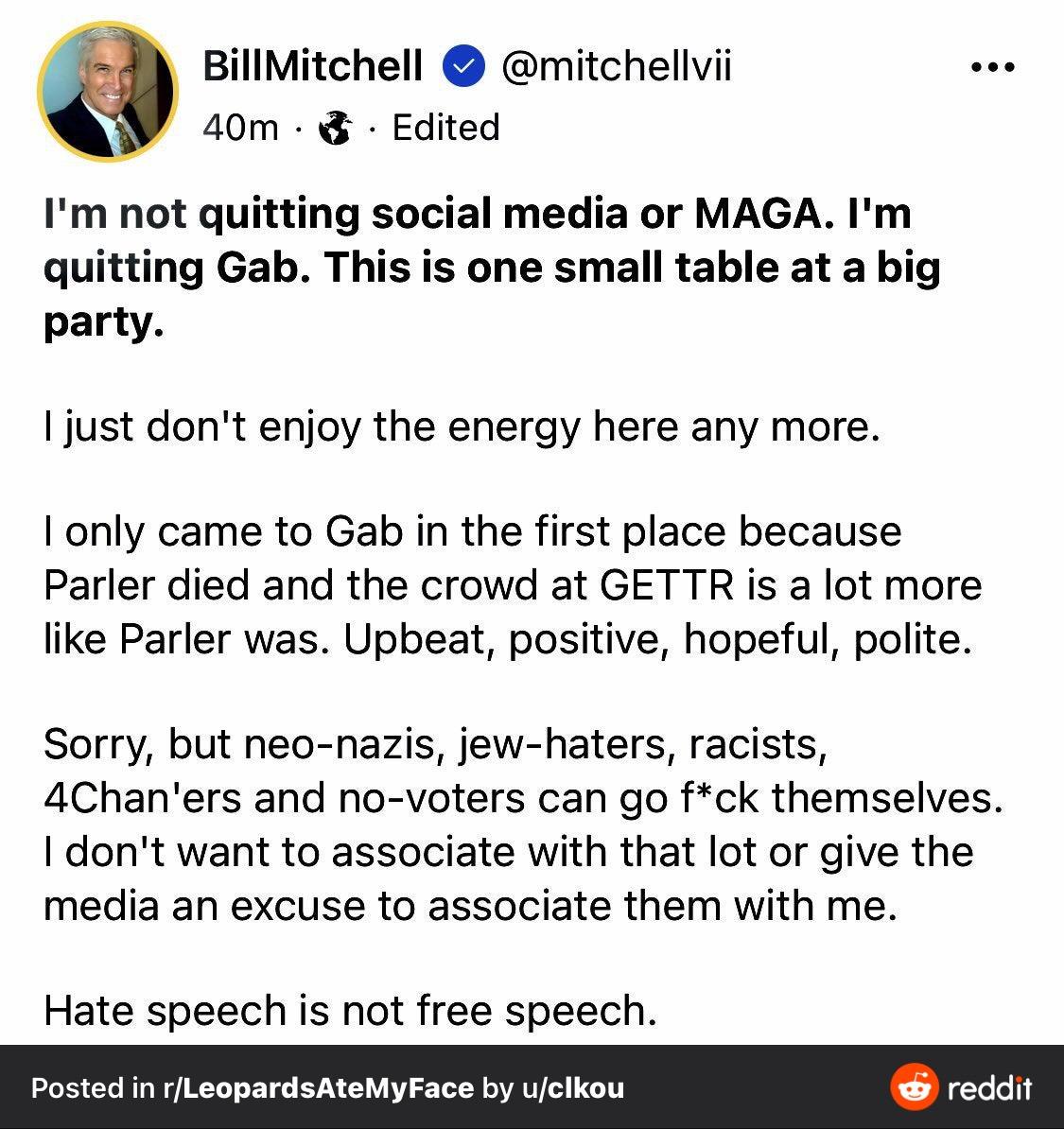 Bill Mitchell is a grifter. A few years ago, he was talking about moving his studio, so he got his listeners to donate tens of thousands of dollars. He never built a new studio. He never even moved. You just stole their money and used it for his personal lifestyle. He doesn't like gab, because he gets called out for his grifting, every time he posts some of his BS.

The absolute truth! What he means is the other sites have more RINOS that support gun control and speech moderation so he feels at home there. At least he's consistent , he hated 1A and 2A.

Rest assured, it's all about finding people to grift off of.

His givesendgo stalled out a while back so apparently he exhausted his gab support.

Then he came here to try and grift but that failed and he ran back to gab to bash us. Problem is, gab and p.w share users so the torment followed him there.

Today he came up with the bright idea to try and force gab to bend to his demands which would encourage more "griftable" people to join the platform. However, Torba has rejected such demands from people way way more influential and powerful than Bitchell so the only thing he accomplished was pissing off the rest of gab.

Like all conmen, once the money dries up they lash out at their victims then try to find new ones.

Follow him to gettr and continue the bashing!! Can't let him off the hook that easy

Don't join gettr. Apparently this has been a psyop to get people to join. They're flopping and investors aren't happy. So they met with bitchell the other day. Dudes some bigshot over there. Bitchell then had him on his vlog. And now, "suddenly" bitchell is attacking gab encouraging everyone to move to gettr where they ban everyone that disagrees with the approved RHINO narrative. They're even thanking him for doing it.

So bitchell has obviously gotten paid, gettr will get the increase they need to appease investors, afterwards they'll delete everyone that doesn't fit the narrative. Apparently they've done this before.

I would only join to tell him he's an idiot then delete my account!! Lol ... I for sure wouldn't pay anything

Well, what actually happened was dozens of pedes immediately ignored his stupid shills and continuously hammered his gun grabbing and he tried to play the "Trump said it too" card because he clearly thinks we're a bunch of mindless leftist cultists who clap and bark like seals whenever we see Trump. He then got called a faggot and instead of immediately shooting back (which would have at least earned a little respect) he clutched his pearls and fled to Gab to tattle on us and how his delicate sensibilities were offended and he much preffered the version of us that lived under reddit's chains and muzzles.

"Hate speech is not free speech"

Unless the "you" in that sentence is some arbitrary "protected class".

Only fags believe in hate speech

We don't need 1A for "nice speech"

This needs to be hammered home everywhere you can.

Mild, politically acceptable speech requires no protection in the first place. The First Amendment exists to protect the people saying things others don't want to hear.

Yes. seriously. How can you be pro-freedom if you don't recognize free speech ??

And nothing of value was lost.

In Bill’s defense, there are a lot more antisemites on Gab than there are faggots. He felt outnumbered.

I'll be honest, I'd rather have them out in the open and allowed to frankly discuss their horrible opinions. It makes it easier to mock and belittle them when they are under the spotlight.

He ends his statement with a leftist talking point. What a faggot.

Gab has tools to block certain words or users. We all have access to these.

Makes me want to join GrFTTR just to go call him a faggot. If we keep chasing him from platform to platform I have $12 that says he’ll break like Shia LeCoof.

signs up for getter

Is speech free if you prevent people from saying things though? Bill is becoming an even larger Faggot.

Actually, hate speech is free speech. The moment you make exceptions, you no longer have free speech.

Holy fuck this guy is an idiot.

Hate speech is a prime example of why free speech exists. You dont need to protect speech everyone already agrees with.

- Signed, someone who thinks bad language is unbecoming."

What kinda faggot censors the word 'fuck? on the internet? Either say it or don't.

Spouts leftist slogans. Wonders why we call him fake right.

I never knew who this faggot was until he showed up here a few weeks ago, but watching his "career" crash and burn has been fkn hilarious. Good work pedes.

The 1st amendment only applies when it fits the narrative to these cucks. I can say whatever the fuck I want EXCEPT for two things which are specific to threating any POTUS.

That means you liberal soydrinking grandstanding faggots are free game.

What a fucking simp this guy is. "Oh no, you said mean words, let me make up terms for words I don't like." No wonder so many people call this guy a faggot.

Hate speech is literally the definition of free speech. No one attacks middle-of-the-road speech that offends nobody. By definition the only speech that needs to be protected is 'extreme' forms of speech.

Anyone that uses the term "hate speech" unironically is a FAGGOT.

That last sentence says it all.... speech is speech.

I hate these 1488 fuckers which are openly trying to attach themselves to MAGA to destroy and replace it, and have no problem with and encourage them being banned here since this site is dedicated to support for MAGA and not free speech, but Gab is literally the free-speech Twitter. Besides, let's be honest. The more "extreme" types were on Gab first, they were the first ones banned off of mainstream social media, pedes didn't start joining Gab until later as social media Nazis started banning regular conservatives. I 100% support Torba's position on this as should any real America First conservative, regardless of how I feel about these authoritarian flavor of the week leftist stormfags.

Hate speech is the only free speech. If everybody agrees with what's being said, what's the point of legally protecting the right to say it?

Isn't it great having choices?

Bitch you never were part of MAGA. You represent everything MAGA stands against.

And hate speech is free speech. Just free speech that you call hate, and that just like your opinion man.

he is a buffoon. there is no such thing as "hate speech".

There is only speech some people do not like.

In other words, if you don't like what someone is saying, IGNORE THEM, go away, walk away, leave.

There is no picking and choosing what is acceptable. Because that is IMPOSSIBLE to do. What is "hate" to one person is not "hate" to another person, on and on and on.

There is no ‘hate speech’, just speech that you hate -Tom Macdonald

THERE IS NO HATE SPEECH

Hahahaha should we continue to brigade this faggot until he quits social media entirely. What a fucking loser.

"Hate speech is not free speech"

No mention of marxism and its derivatives? 🤔