TheDonald
Communities Topics Log In Sign Up
Sign In
Hot
All Posts
Settings
Win uses cookies, which are essential for the site to function. We don't want your data, nor do we share it with anyone. I accept.
DEFAULT COMMUNITIES • All General AskWin Funny Technology Animals Sports Gaming DIY Health Positive Privacy
1440 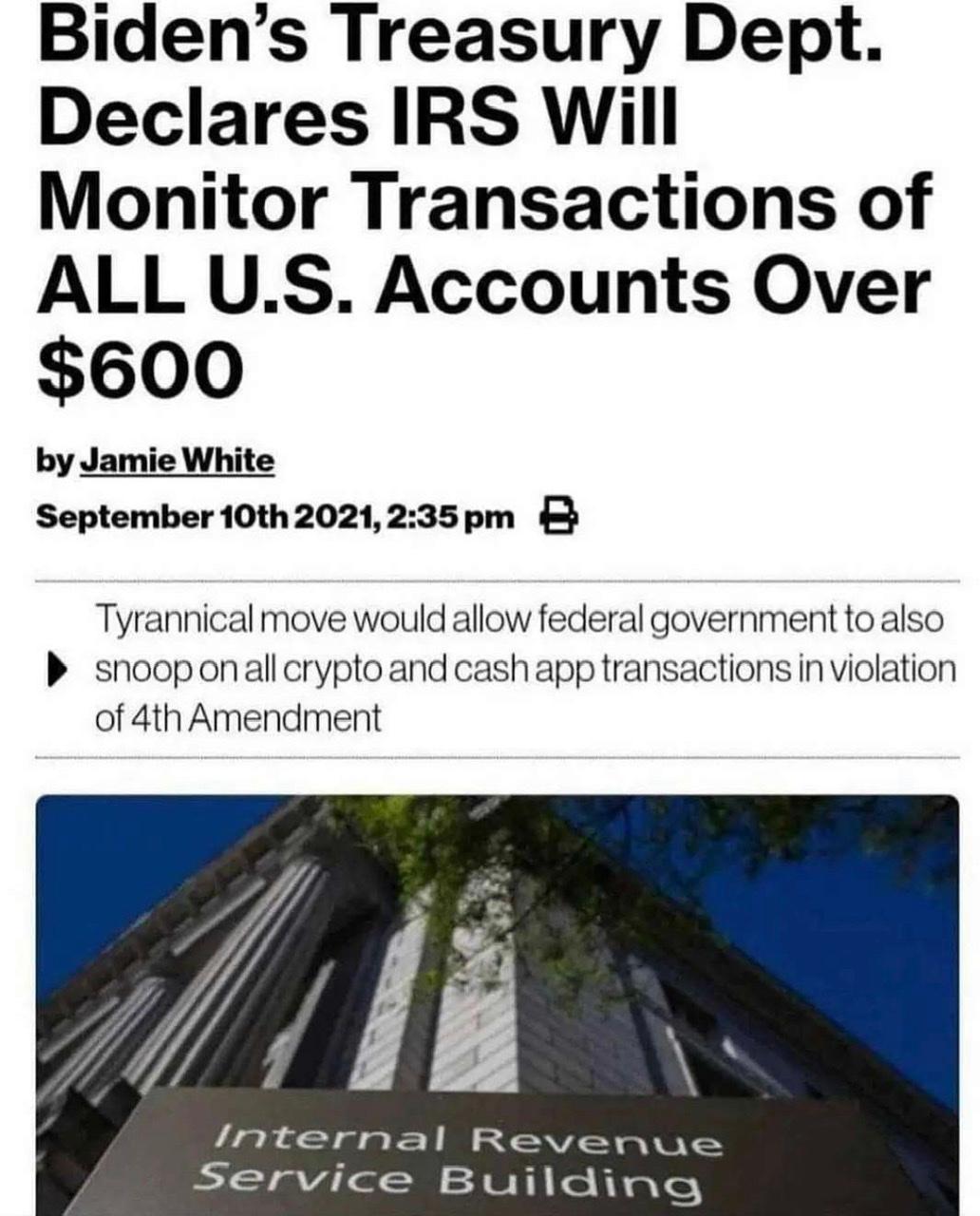 I'd love to see this in action. Good Lord, I have been fighting with the IRS for THREE years because they applied payments I made for business to my personal account. I have literally been telling them for THREE years that this is the case and they continue to send me a check for the "overage" every year and try to fine me out the ass for not fulfilling my payment schedule for the business.

THREE YEARS and they couldn't call up the personal department and swap over the money to fix this issue, but now they have time to monitor everyone's bank accounts?

I do find it ironic the founding fathers would have gone to war for less. We're taxed out as the ass today. They'd fucking flip.

The bears are all getting it.

The IRS loves excuses to expand it's employee base.

You are misunderstanding the point of this order.

They won't monitor for fraud prevention.

When you do something they don't like your account will get audited and exposed for whatever irregularities they can find to fine/convict you for.

Even perfectly legal transactions will get "investigated" and you will have to prove your innocence or face fines and/or jail time.

Banks have become agents of the government. Presumably under the guise of "assessing my continuing creditworthiness", as I have a credit card issued by my primary bank, I am constantly asked to "update my income information" as well as provide other information that is frankly NONE of their business.

I think you have that backwards, friend. Banks control the world.

It follows the commutative property of mathematics; same results regardless of the order of the operators

They have contractors selling them machine learning now.

sure they can. You "disappear" and are "processed" at a foreign prison. Or they put a gun to your child's head. Or technically, with blockchain, they fire up a few hundred million new nodes and the 51% out-vote the 49% on what the "truth" is in the ledger, so they can change ownership or reverse prior transactions.

The only thing uncertain here is whether they take 10% for the big guy.

Oh, and no word yet on whether they will "monitor" Hunter Biden's account(s).

4th Amendment is already on life support. IRS already gets notified when a 10k transaction occurs. Apparently the government’s interests outweigh the fourth in such cases. Never seen where that test is laid out in the Constitution. Must be next to the part that says 2A can be infringed with full-auto bans and all the other bullshit.

10k was always a rule of thumb, up to the discretion of whoever filled out the form

Meaning they can fill them out under it.

Ah. Thought you meant it was optional all around.

What is the end game here? I hate to sound ignorant, but why is this happening? What's the Democrat goal?

It's to monitor what you're buying and ultimately control you. Look at what Obama tried to do with Operation Chokepoint:

Now apply that to ALL of your purchases that are over $600.

Its not all purchases over $600. Its worse. Its all transactions in and out of accounts with a balance of more than $600.

Thank goodness in a Biden economy I never have more than $600 free floating in the account after bills etc....

I'm poor too. We need a massive anti-IRS campaign.

We can’t let the American people buy guns or ammo or life saving ivermectin, can we? We have to know who is buying what, for their own good.

The current narrative holds that socialism is public ownership of the means of production.

This is a lie

The fatal flaw of socialism is imperfect information -- it's impossible to know what the market is doing at all times in all places. This leads to errors in resource allocation.

By monitoring all transactions of significance, they are attempting to solve the problem of imperfect information.

They trying to centralize control of the economy. They already have control of a large part of it via their massive procurement budget -- we just saw them flex that power by requiring all companies that do business with the government to vaxx their entire workforce.

furthermore, once they know where all money is going, they'll be able to use their party-controlled businesses to capture innovation and trends so as to avoid getting "myspaced".

if you're not a party member prepare to become a peasant, because there's only two classes in Marxism: nobles and peasants

Communism, just like China monitors and controls its people.

A confession that the pentagon cant account for a trillion dollars? Ask the IRS!

A fraudulent investment firm shrugging and telling stakeholders that they lose their cash and they dont know where the money has gone? Ask the IRS!

How is antifa and other domestic terrorist groups getting financed, and by whom? Ask the IRS!

If the IRS were truly stomping on organised crime, their staff would get threatened, maimed and killed. Or their families would. Do we think this is going to happen?

according to my local news last week, the purpose of all those new agents is to "help process tax returns and get those refunds out faster."

Time to split my paycheck across multiple accounts at multiple credit unions.

It's any account with a balance of more than $600. Time to start keeping your paycheck under the mattress.

According to this article: https://www.americanbanker.com/news/banks-escalate-fight-over-irs-reporting-in-biden-budget-plan it's even worse than that:

It could result in banks having to report transaction data for any account with at least $600 of inflows or outflows annually.

If you do manage to get a paper paycheck, often the only way to cash it is to pay huge fees at fast cash places. Banks won't cash checks at all if you don't have an account, and even if you have an account they may have a limit on the size of the check they will cash. Stores rarely cash checks any more, and when they do they typically have a low limit.

Plus keeping cash under the mattress in an era of high inflation is effectively throwing your money away.

The whole system is set up to try to coerce people to have bank accounts.

I'm amazed that ATMs don't track who gets which bills... They could do it...

Or keep it in a commodity like rifles and ammo

Good luck trying to buy food with your bullion

Maybe he meant bouillon cubes, to make a delicious broth?

Add some rib bones and you got a stew, baby!

At this point, I'll take whatever will get this party started.

At this point is anyone still under the illusion that the government hasn't been monitoring all of these transactions for years?

They're just finally admitting some of what they have already been doing to normies.

EXCEPT THOSE FROM ILLEGAL IMMIGRANTS SENDING UNTAXED BLACK ECONOMY CASH TO MEXICO.

Even if a court blocks this, expect private companies to start announcing that they will take it upon themselves to report this info to the government.

If they're not already. Things like Apple Pay could very easily track their users, and they could bury the permissions to share the data in the TOS and EULA.

(I laughed at Apple when they offered me a "low" interest rate of 19%, with my excellent credit and income, for their Apple Card. Fuck you, Tim. (It's also issued by Goldman Sachs, fuck that noise.))

Your CC companies may already share your spending data, not only to the Fed, but to the highest bidder. I'm told by friends who work in banking, the Patriot Act and other Federal laws surrounding "terrorism" have given the Feds a lot of tools to look into your finances. I see this new bullshit as just tightening the noose, not introducing a new one.

And, it's probably part of the steps towards an official digital currency, which will be tracked.

We live in a surveillance state. Expect a lot more like this. The sky is the limit with Obama's team running things.

Time to be unbanked

time to be ungoverned.

Not without a warrant hellooooooo??????

they'll be watching my account closely then!!! Don't care either!

So crytpos will probably get another boost. At some point, it will be possible to function totally outside their control.

Believe it or not, that’s what they want to happen. Then we move to a cash free society and your access to your cryptocurrency goes bye bye.

Lmao who funded their r&d? Crypto is covid level

Tell me about the alphabets' trading platforms. Do you know how those work?

There it is - VAXX PASS = CRYPTO ENABLED SOCIAL JUSTICE SCORE

Run on the banks, anyone?

Well this certainly sounds like a 4th amendment violation of illegal search without any probable cause.

With the way inflation is going, it won’t before long that you’ll need $600 to buy a loaf of bread.

Well, shit, that might be every gas-station fill-up before too long…

Time to take my money out. Can you say run on the bank. Money orders work just fine.

Well yeah ... But be afraid of the cbdc.

Well it's pretty obvious that if you can keep more than $600 in this hyper-consumerism world where you are supposed to become enslaved by buying things you can't afford, you're a threat to the system.

WTF. That's a full tank now if you own a pickup...

Simple, just make hundreds of thousands of accounts each with no more than $599.

now you're "Structuring" for the purpose of avoiding financial reporting rules, which is a felony.

don't think these bastards haven't thought of everything.

Bullshit they are only going to do this to us. Don’t think for a min they are watching gates or zuckerbergs accounts. They allow them to hide money in overseas accounts and pay zero taxes.

Rules for thee to the max

The most important headline of the year

Looks like I will be withdrawing around $1k and then depositing it back into one of my accounts every week.

I say we all refuse to pay anything. I say we do it all together and let them look at that.

Lol then we'll just use shadow banks like they do in communist China.

This means my new account # will have to be AR_15.

Welp looks like I’m buying crypto in increments of 599

Unfortunately, you misread it.

It's not every transaction over $600.

Your utility bills amount for more than that. What are you guys talking about? You have to have an account in order to pay shit. Are you all homeless?