TheDonald
Communities Topics Log In Sign Up
Sign In
Hot
All Posts
Settings
Win uses cookies, which are essential for the site to function. We don't want your data, nor do we share it with anyone. I accept.
DEFAULT COMMUNITIES • All General AskWin Funny Technology Animals Sports Gaming DIY Health Positive Privacy
1137 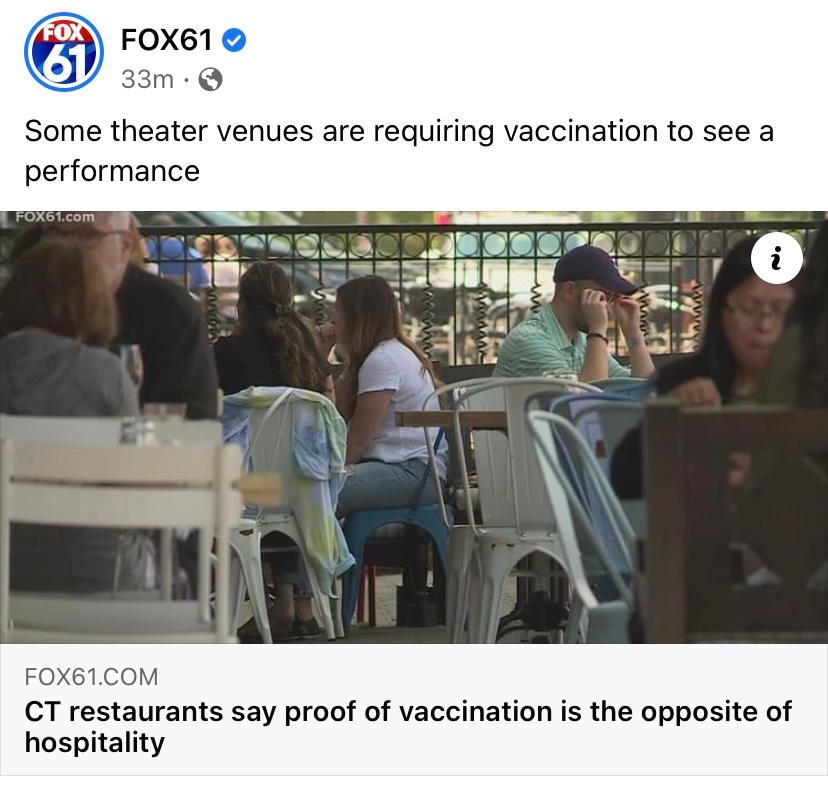 good to see they are finally standing up. fuck lamont.

Indeed, fuck him. He is a despot.

He really did everything in his power to destroy their businesses I settling them with constantly changing requirements with little to no notice to allow them to plan.

Coincidentally, whenever restriction would get more stringent, it was always announced on Sunday and Monday or Tuesday but we will take affect on a Friday so they lose a weekend of sales. However, when he relaxed restrictions it was almost always announced on say a Wednesday but forever reason would not let them fully reopen or relax restrictions until the next Monday, once again making them lose a weekend of sales.

Guess I'll be driving up from Long Island to CT to go out to eat then. Vote with your Dollars.

They will just make it a condition of employment! Companies cannot be allowed to mandate vaccines.

Vaccine passports for restaurants would make their association obsolete in short order, and they know it.

Are New Englanders finallys starting to wake up to whats going on and will they stop just blindly following the Democrat Party?

Maybe after October… State Militia Governor’s Authority to Raise a Connecticut State Guard A new law authorizes the governor, at any time, to raise, organize, maintain, and govern the Connecticut State Guard. The prior law required the governor to take such action only when the Connecticut National Guard was called into the federal service or believed that such a call was imminent (PA 21-2, JSS, § 282, effective October 1, 2021). Organizational Structure of the State’s Militia Units A new law eliminates the requirement that each organization of the state’s armed forces adopt bylaws. It instead requires the governor, as commander-in-chief of the state’s militia, to configure and administer the state’s militia units similar to National Guard or federal military units of similar composition, size, and purpose. It also allows the adjutant general to issue bylaws, regulations, orders, and circulars to administer the militia units. The act also eliminates provisions related to the bylaws, including those on the (1) collection of fines and dues, (2) leadership of associations created in the bylaws, and (3) election and bond requirements of the organization’s treasurer (PA 21-158, effective October 1, 2021).

Just as theaters are all going BK, good job finishing yourselves

Since this is now the land of "private businesses dictating health requirements," why don't we start asking to see proof of negative results on other communicable diseases? Measles? Herpes? HIV? We should go to these commie places and start demanding to see the staff's vaccination records if they're goin to be so retarded as to ask for ours. Why stop at COVID when there are much deadlier/life altering diseases out there?

Not true. You can buy beer, wine, and liquor in stores and bars/restaurants serve on Sundays as well.