TheDonald
Communities Topics Log In Sign Up
Sign In
Hot
All Posts
Settings
Win uses cookies, which are essential for the site to function. We don't want your data, nor do we share it with anyone. I accept.
DEFAULT COMMUNITIES • All General AskWin Funny Technology Animals Sports Gaming DIY Health Positive Privacy
3309 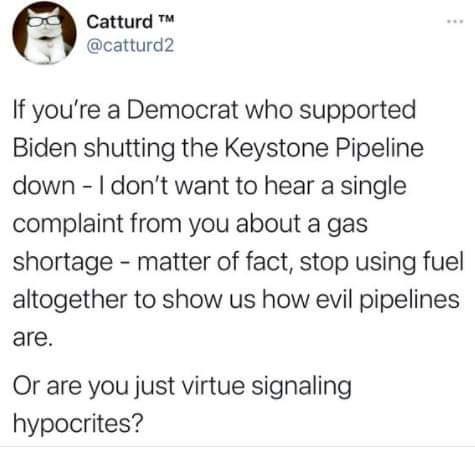 A thousand times, this.

It's worse. If Trump has shut down a pipeline, they'd be screaming from the roof tops about how he's trying to kill people, destroy the economy, and has ties to Russians because CNN.

There's no logical thought for Dems. If a democrat does something it's "meh". If a Republican (especially a MAGA Republican) does something the media doesn't like, it's an outrage. These people are mentally ill, and are INCREDIBLY brain washed.

Or when they're used to produce electricity to make solar panels and wind turbines. They have to use way more electricity produced from fossil fuels to make a wind turbine than the turbine will make in its entire lifetime several times over.

and a fucking woman

If there's one thing we've learned in the last few years, it's that Democrats don't care if they're hypocrites.

Seriously. This is all elected “Republicans” do... point out dem hypocrisy. Oooooh, that will learn them!

Wait, wouldn't just make them hy.... oh, I see what you did there

They honestly don't care about anything other than power and control. It's why they have no qualms attacking the same "oppressed" people they claim to stand for. They do not experience cognitive dissonance.

If anything, they enjoy how easily they can get away with it.

Its ok though because they are morally superior to you

I've a different take. I do want to hear bitching about this gasoline shortage from Democrats. That way I can rub their fucking faces in it.

Would this be a good time for me to buy a used truck from some guy in SC?

Absolutely. Take advantage of a shitty situation. Shit, I bought my house in 2008. Haha

If you are a "have" in this time period, flaunt it. It makes worthless leftists feel jealous. Not all of us can be failures!

spoiler alert no one actually voted for biden

My parents did, and they are both alive.

I can't do that. Although in many respects I feel closer to my childless aunt and uncle who are huge Trump supporters that fully understand the rigged selection.

I want to marry Catturd

Hypocrisy is a virtue, to the left. They think that they’re helping, by lying.

one of the finer points mr. catturd has made

On a related note, if everyone worried about climate change seriously actually literally killed themselves, it would actually have their desired beneficial impact on CO2 emissions.

Reminds me of the climate change democrats that buy beachfront property...

I believe an actual climate activist has done this. They have no self awareness

Kind of like BLM leaders that talk all day about how bad white people are, then buy houses in almost exclusively white neighborhoods...

Who here would vote for CatTurd for president?

Liberalism is a mental disorder

Why do we put so much value on hot takes from twitter accounts when like 80% of the website is leftists? Memes are fun and all, but this is just drivel. Social media is cancer.

Commies are always liars and hypocrites. They are evil to the core.

if Pipeline workers can learn to code, then you fuckers can lean to get around without gass - GOHAN (Go Hug A Nut)

Why is this faggot getting spammed so much on here?

He got his own jet airplane.

To own the libs, duh. The only way to defeat the left is to share Catturd, rare Pepes, and random celebrities when they say something this site likes.