We are working on a project and need to use a large dataset with dimensionality (at least 10 columns) and mostly numerical for some basic multivariate analysis.

Does anyone have some ideas on interesting datasets to use? Anything but covid.

In other words what are the alarms like to your work place Emergency Exit Doors (if you have one) are they tied to the central alarm system or just to the door itself if so ever done it by accident or seen/heard someone open one? In that event what is usually done about it?

I found the idea of an extension that creates a comments section on basically any page on the internet very useful. I'm said that the extension failed. Know of any alternatives?

Today was the first day I've ever seen something like this on Windows, as far as I can remember, and I've disabled the lock screen tips because of it. Anyone else have a similar experience?

Hello. I am in the process of looking for jobs in tech (software). However, in this day and age, it's hard to look for a company that is not radically left leaning. Hence, what company is worth applying to and working for? Any advice for a youngster preparing for a career in tech in this day and age? Thank you in advance!

JASON: When it comes to the green energy nonsense, understand this: The Democrats are pushing electric vehicles on America. **Now, you can’t afford them. If you’re wealthy and you’re a trust fund brat out in San Francisco, you can afford them, but you can’t. Understand this. The Highway Trust Fund — I was on Transportation and Infrastructure as well — is broke. **They don’t have enough user-fee revenue, so they gotta steal from general revenues to do something that should be a user-pays system.

Guess who’s getting a free ride on this? Electric vehicles! They pay no gasoline tax, the primary funder. They get a $7,500 subsidy when folks buy them, and that’s what they want to expand? They want to…? The reason I bring this up is every time oil prices spike because we’re basically banning energy production, they just say, “We’ll just drive an electric vehicle!” You’ll have no roads then, folks. But here’s why oil prices didn’t skyrocket as of a couple of years ago when Rush talked about it.

RUSH: The free flow of oil at market prices is the number-one factor in a stable economy in this country and most of the Western democracies. You might not like hearing that, but it is. It’s why when Saddam Hussein went into Kuwait, threatened to shut down the oil, take it all over, we didn’t waste any time. George H. W. Bush dispatched troops. We could not allow that to happen.

The free flow of oil — I don’t care what the climate change ninnies say. I don’t care what the anti-fossil fuel crowd says. The world functions on the free flow of oil at market prices. Any interruption is a potential disaster. Any oversupply depresses prices. It’s a delicate balance. There’s tons of it. The challenge with the supply of oil is meeting the demand without creating a whole bunch of surplus. It’s a logistics problem. It’s a pleasant one to have.

So with the United States production rising, the Saudi production, OPEC’s production is gonna have to be cut because the world supply is what it is. The world demand is what it is. If the U.S., because of the dominant position we have, sets the price, the Saudis are gonna have to accommodate. So they, they might have been looking forward to cutting back production anyway. If they didn’t, prices would collapse because there’d be way more supply than the world needed."

The article and many others like it are right. The more the left push for this crap the worse it back fires. For one there isn't enough electricity to charge them which if everybody in the US had one we would quickly kill the grid which it will take several YEARS if we start RIGHT NOW to make new power plants to keep up the demand.

Interestingly enough Disney is starting to go towards light shows that uses water so hopefully that is a start in the right direction as you can do quite a bit of interesting displays if you put your mind to it and STILL have a good time without shooting off millions of dollars worth of fireworks each night.

I recently heard in a vintage smoke alarm YT channel that smoke alarms didn't always do the 3 beep (pause) 3 beep (pause) sound effect and it was a result in some kind of law in coding that made it happen in the 90s to the sound we know of today.

So are any of you old enough or got a house WITH old enough fire alarms to hear the difference?

In before "avoid Windows 11"

In before "lol Microsoft store"

I'm an IT guy for a living, I have my reasons for having Windows 11.

Anyhow, using my work account for O365 fucked up my Microsoft store. Thought I was going crazy at first, uninstalled O365 and unlinked my work account. And voila. Worked like fucking magic.

This didn't happen before on Windows 10.

I have an archive from a deleted google account that I want to browse.

what do you suggest for opening it?

This past week I've noticed that almost all of my youtube downloads are maxing out at around 50KBps using either one of these utilities. A 20 minute video that I could pull in a few seconds now takes over an hour to grab. Anyone here encountering this problem, too? I'm aware that the official rationale would be to probably save on bandwidth and discourage people from watching content without ads, but I'm kinda worried this is another attempt by Google to circumvent censorship and archival of content that would be deemed "problematic" by them.

My favorite CSS Preprocessor has had their site littered with BLM shit for a year now. Any attempt to take it down is blocked by this idiot that works for Google. Nothing like decadent rich white girls... (media.communities.win)
posted 9 days ago by ThunderSizzle 9 days ago by ThunderSizzle
20 comments share
20 comments share save hide report block 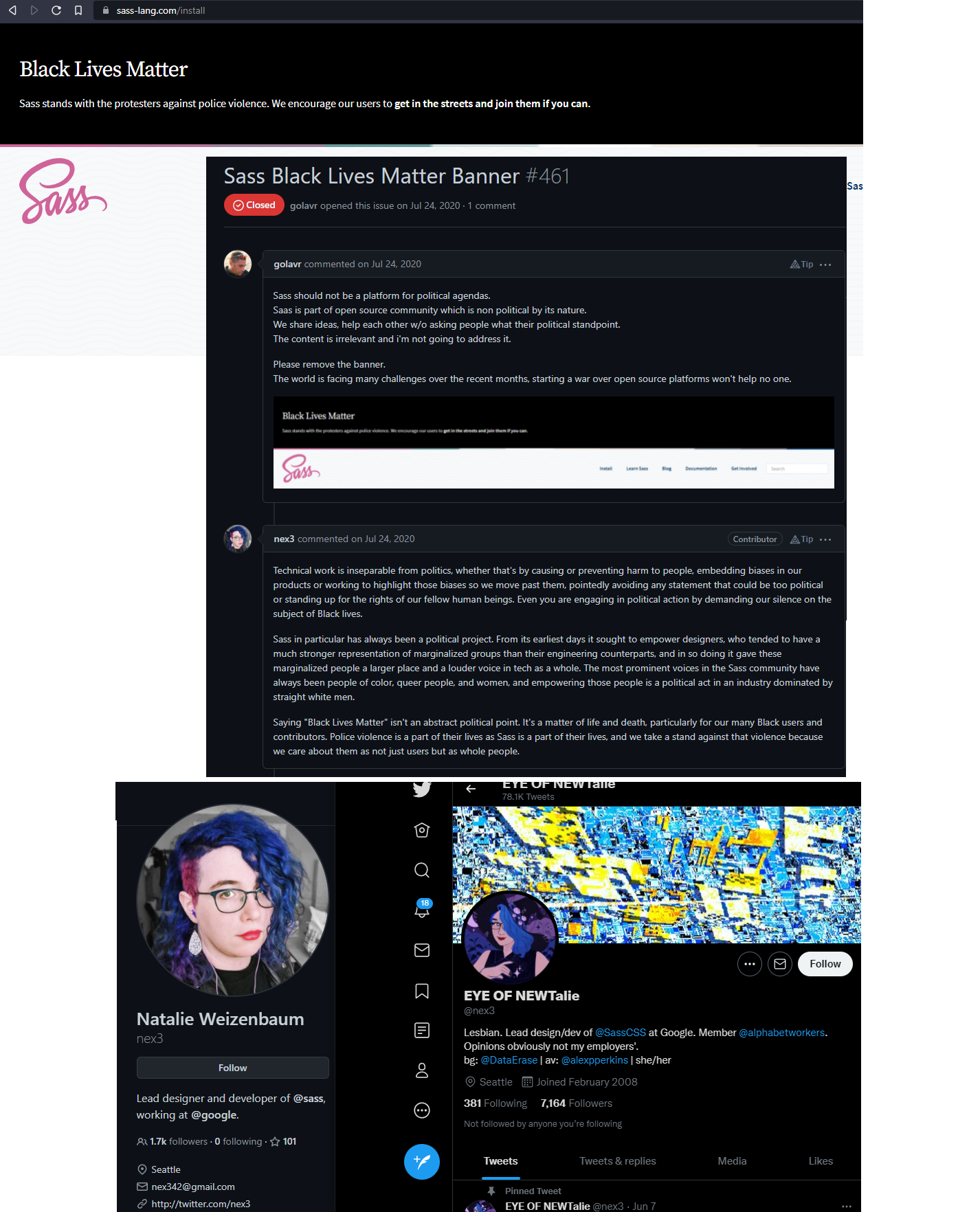 I got a call from a vendor who I have years of experience working besides and he asked if I would be willing to use my expertise on their upcoming project.

When I worked on past projects for this vendor I was either a direct employee or as a consultant hired and paid through a preferred contractor. In order to take this gig I’d have to go back to working for this contractor but I’m a bit butthurt by them cause they left me out in the cold when Covid hit.

I’ve tossed the idea around in my head about starting my own consulting LLC and bidding this job directly. No idea how to start with this. Now idea how much to bid and no idea how to make sure my family has health insurance.

For reference I was grossing between 85 and 95 in this prior position.

I am de googled. Installed graphene os and google can suck my dick.

Mental Outlaw gives us a description of it. The good news is (for now..) is that it appears to be targeting machines in South East Asia. The bad news is that it looks like it is pretty sophisticated, probably being done by a team and is under active development.

I'm trying to find a good program for making custom DVDs, does anyone know which one is the best? I'm currently looking at Cyberlink's Power2go and Powerdirector.