KotakuInAction2
Communities Topics Log In Sign Up
Sign In
Hot
All Posts
Settings
Win uses cookies, which are essential for the site to function. We don't want your data, nor do we share it with anyone. I accept.
DEFAULT COMMUNITIES • All General AskWin Funny Technology Animals Sports Gaming DIY Health Positive Privacy
66 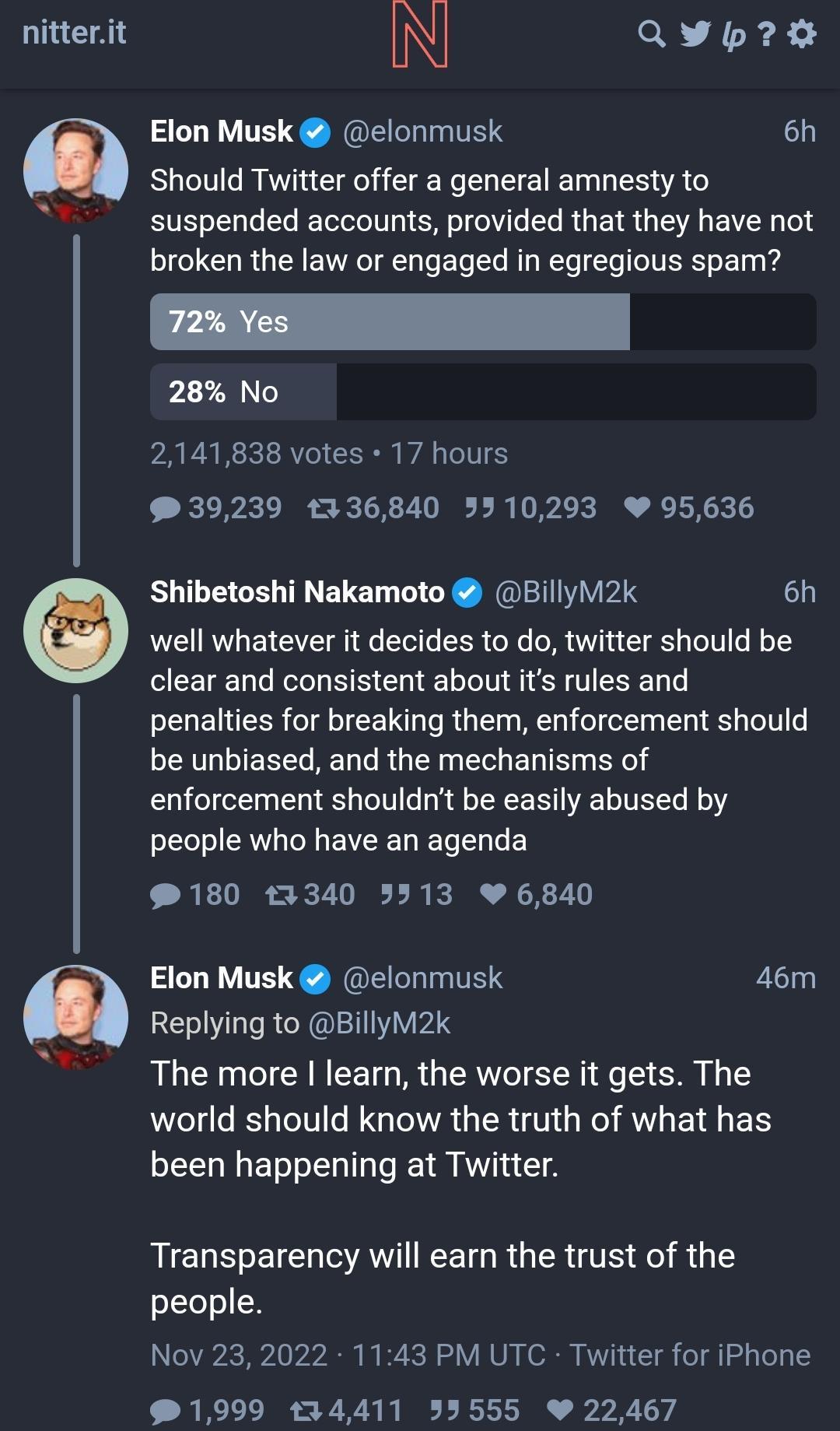 It'll be put up or shut up time before long. The right isn't buying this two more weeks trust the plan shit again.

This might be a warning to the previous bad actors: If they take Elon down he's going to reveal on the skeletons Dorsey and company were keeping in their closet. Either way he already refused to unban Alex Jones so I'm not expecting much. Even if he runs that shithole into the ground it's a win for us.

Either way he already refused to unban Alex Jones so I'm not expecting much.

There's no way he can unban Alex Jones and not lose every remaining advertiser Twitter has left. To say nothing of efforts to get data centers to stop dealing with Twitter.

If he lets Alex Jones on, twitter could very well be offline within days.

No data center with a brain would stop dealing with Twitter; Tesla; SpaceX.

Oh wait, I said 'brain'. Damn it. Guess I agree with you then.

Then all blm sjmps need to be banned

I mean the guy makes electric cars for a living. He's like leslie nielson from the naked gun movies, standing in front of a burning fireworks factory telling everyone to "calm down, nothing to see here".

My guess is that they were banning people at the direction of the Prince Alwaleed bin Talal Center at Georgetown University.

Or even US government agencies.

So which law did Alex Jones break? What spamming is he guilty of?

Fuck Elon. All this poll bullshit shows is how completely broken Twitter is and has always been. How about he just go through and see if any of the banned accounts actually broke the rules. Chances are they didn't and were simply banned for political reasons.

So which law did Alex Jones break?

Defamation, one of the few directly speech related laws. To the tune of billions in damages. That is signed, sealed and official at this point.

It's not like I agree with the decision or the ridiculous magnitude of damages, but whilst "What law did he break?" may have worked a decade or so ago, it is just a losing arguement now.

The legal system has been fully corrupted into an engine of unchecked state power and a shambling abomination wearing the skin of the concept of justice. "What law did he break?" says chauvin murdered the guy who OD'd in his vicinity, but the Antifa security guy who gunned down a MAGA guy without warning didn't.

Fuck even pretending to believe that if you just play nice by their rules they won't be able to fuck you over, they'll just change the rules. Go back to first principles, declare your own judgements and don't lend any credence to their crooked institutions' judgements.

Whatever happened to Alex Jones? Did he find a way out or something?

Hes not a democrat

Elon is talking about revealing the background to the Hunter Biden laptop coverup.

Elon is going to make Biden angrier than when he fucked up the withdrawal from Afghanistan and retaliation by bombing an innocent family of 7 collecting water.

Y'all might have seen the sticky on TD already, or just the poll, but this full screenshot gives more context.

Broken the law THROUGH THEIR CONDUCT ON TWITTER SPECIFICALLY, please

I'll believe it when my account is reinstated. I got tossed for insulting a tranny.

oh, antichrist, and yet, some people will believe you