KotakuInAction2
Communities Topics Log In Sign Up
Sign In
Hot
All Posts
Settings
Win uses cookies, which are essential for the site to function. We don't want your data, nor do we share it with anyone. I accept.
DEFAULT COMMUNITIES • All General AskWin Funny Technology Animals Sports Gaming DIY Health Positive Privacy
45 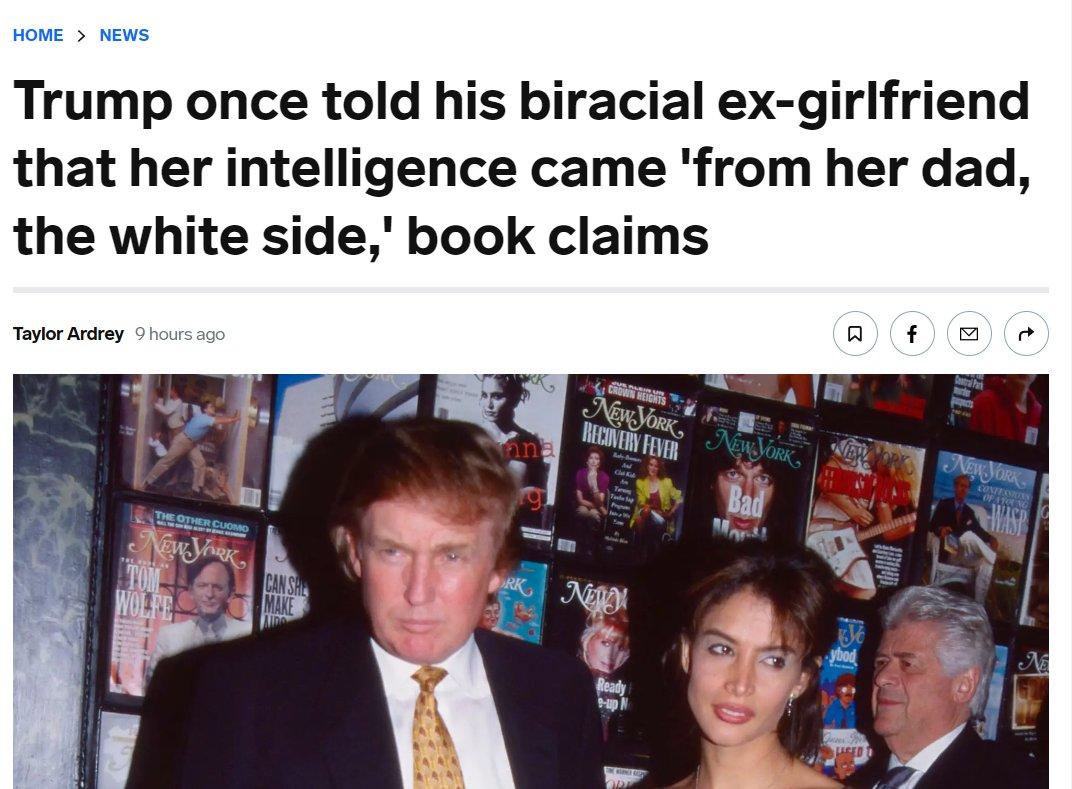 The mainstream media will lap this up but I don’t believe it for a second. Anyone who has something negative to say about Trump has the red carpet rolled out for them. Plus Trump was quite popular with Jackson, Sharpton, and NAACP

Anyone who has something negative to say about Trump has the red carpet rolled out for them.

Yeah, it's a quite easy way to get publicity/attention, and many want it.

Without context it does not even mean anything, I do not know who this women is. As far as we know her dad can be a very smart individual like an engineer or doctor and it was a compliment rather then a race thing. I doubt he actually said the white side of your family.

Not so long ago being compared to your dad was a nice thing to do. If he was a racist as the media claim why in the world would he date mix-raced women, is not like he had trouble finding hot women to date.

I think there is a chance he said it as a joke to her, but you're right the MSM will make it about white supremacy.

They have searched for 5+ years for something racist he has done or said, at this point I don't think they will find anything that is actually racist so they take something out of context that might sound that way... Same as the grab em by the pussy.

By the way, the regime claims that Trump persisting in claiming that the Central Park 5 were guilty is "racism". OK, so what does that make Elizabeth Warren and others who call Darren Wilson a murderer even though there were no grounds for even an indictment?

The 5 definitely did it

Even if they did, it would not matter one bit to his supporters.

In fact, the more the Teflon Don says outrageous shit to bollix up the assholes running things, the better.

I mean, it's not wrong either kek

And blacks remain stupid even when taken and raised in white countries: US SAT scores: "Of those scoring above 700, 43% are Asian and 45% are white, compared to 6% Hispanic or Latino and 1% Black."

I read some study, I can't pull it up on google from memory with the effort I'm willing to make for this comment, that basically said that even though you took blacks from sub saharan africa and raised them in the US, even if adopted by white parents, they still showed a substantially lower IQ.

IQ isn't entirely genetic, but a lot of it is genetic. Genetics defines the potential. You can fail to reach your potential for other reasons as well. North Koreans are probably dumber than South Koreans for the same reason they're short: poor nutrition.

The "civil rights act" was the final nail in the coffin of the American experiment.

I’m aware of those studies but I don’t believe he said that.

A smart person would know what averages are

He is an interesting fellow. Sometimes he says really smart things, but at other times he accuses me of being an FSB agent, or has some Eyepatch McCain-tier takes like claiming that Havana Syndrome is actually real.

There is literally no point in publishing this unless they believe that adding to the noise will help them defeat him somehow. They think the media is a magic password to alter reality.

100% made up. It's just what leftists imagine comic book villains and their Blumpf talk like.

Maybe he even said that her intelligence comes from her dad. If Thomas Sowell marries a janitor, then their children will have their smarts from him. He definitely did not say "the white side".

“Trump’s SO RACIST he dated a biracial girl!”

It's fetishism and cultural appropriation!

Nice use of quotes! So, he didn't actually say that, the book "says" that. But using the quotation marks in that way gives the appearance that these were his words. Mwah. Always nice to see the old tricks.