KotakuInAction2
Communities Topics Log In Sign Up
Sign In
Hot
All Posts
Settings
Win uses cookies, which are essential for the site to function. We don't want your data, nor do we share it with anyone. I accept.
DEFAULT COMMUNITIES • All General AskWin Funny Technology Animals Sports Gaming DIY Health Positive Privacy
68 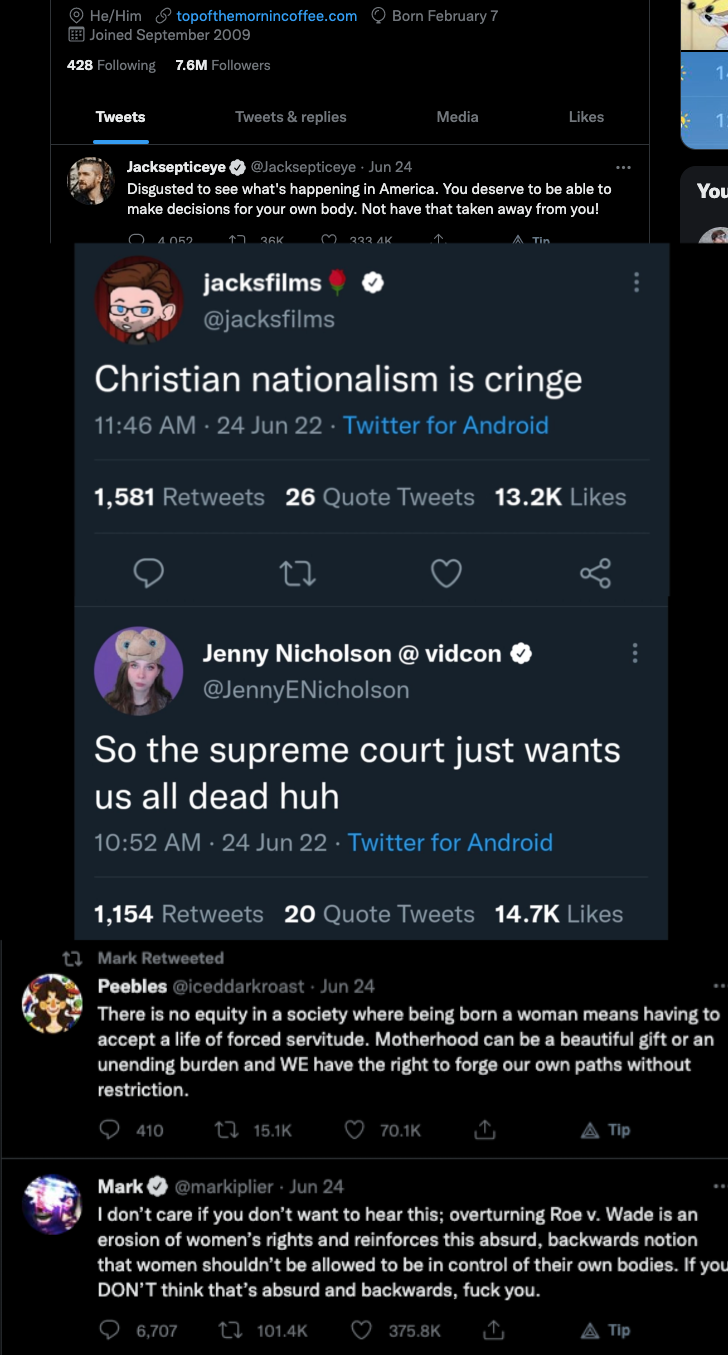 It's amazing how none of them even acknowledge that there is another person's body involved other than the woman's.

They either understand this or are ignoring it, or they just don't understand the other side's arguments at all.

I saw some people arguing in a chat yesterday and when the life of the baby was brought up the pro-abortion guy just kept complaining "THATS NOT SCIENCE" and saying that the Right were anti-science about everything.

Pretending not to understand the other side has been the defining element of the abortion debate since forever.

They do understand, but everyone is so thoroughly conditioned and fears women's wrath.

I brought this up before, but does anyone remember Nathan Pyle, the Strange Planet meme maker? It was some wholesome childish crap, but women found out he was pro-life by stalking his socials for old undeleted posts from before he went viral and harassed him off Reddit entirely. He hasn't posted there in 2 years now.

The feminists will not be defeated until we treat them like they are, a wannabe mafia, running about 17 kinds of racketeering scam.

They do understand, but everyone is so thoroughly conditioned and fears women's wrath.

They are capable of understanding, but they don't, because their entire ideology is built on deliberately misunderstanding their opponents and misrepresenting reality.

And to compound it, politics is entertainment for them and they have fun building up this epic drama where they then can be the Hero of the story.

They want it to be true, therefore, no need to make it any more complex. Ridiculously narcissistic and I hope at least some of their audiences see it for what it is.

There are two other people involved: the child and the man, whose blood the child is. Three other people, once you accept we are children of God.

They're just being hypocrites on purpose. Anyone with half a brain identifies the zygote/fetus/baby has a completely different DNA to the mother, and is not only alive, but thriving in the environment it's supposed to be in (a womb, duh).

To say that the destruction of such a creature is anything but murder is nonsense, by their logic you could punch some endangered pregnant animal in the gut and it wouldn't be much of a crime.

Someone made an analogy the other day that I really like:

Say you had a pinata with $100 in it, and you gave someone a bat and asked them to demolish the pinata and keep the money, they would likely do so with no hesitation.

Now tell them there's a 50/50 chance the pinata also has a kitten in it. Most people wouldn't destroy the pinata because the chance of crushing and killing a kitten isn't worth it for most people.

The Left are those people who value the $100 (their own personal convenience) so highly, that they're willing to risk killing the kitten (human baby).

How could returning the decision to the states be considered a step towards Christian Nationalism? Do these people not know words have meanings?

Shh. If they don't know the difference let's go all the way...

Fuck no. We didn't fight off one group of sadistic retards who want to enslave men to throw in another.

You expect emotional wrecks coked up on a cocktail of anti-depressants to understand the legal details of what has transpired ?

I wonder if it's stupidity or gaslighting.

Can't it be both?

i guess I kinda became a Christian Nationalist, and I'm not even Christian.

That might be a step up from "culturally Christian" (like the "cultural Muslims" who aren't even believers, or most people in Japan in regards to Shinto today I guess).

Good analogy with the Japs there. I think most of them celebrate & appreciate their old culture / Shinto, while not being literal adherents to it themselves.

So the supreme court just wants us all dead huh

A) Learn to capitalize. I'm assuming your phone did it automatically for the first word, so you get no points. B) Abortion wasn't overturned. C) Even if abortion was overturned, that would lead to more life, not more death. You moron.

There is no equity in a society where being born a woman means having to accept a life of forced servitude.

Bitch, that's called life. Nothing is for free, man or woman.

If you DON'T think that's absurd and backwards, fuck you.

This isn't that though, not even close. And I'm not even sure it would be cringe, at least considering our current society, and what the other side wants to implement.

C) Even if abortion was overturned, that would lead to more life, not more death. You moron.

Saw a tweet yesterday, no joke, claimed that if Abortion is illegal, fathers would just simply kill the pregnant mother instead.

So we should make baby killing legal, because bitches get cummed in by lunatics who want to kill them.

As as aside, I wonder how many fewer false paternity claims would be made 🤔

Why do women think illegal abortions automatically mean death? Even when abortion was illegal 50 years ago, there were only a handful of deaths per year. Pretty sure there are tons of drugs that will induce abortions more efficiently now. They didn't care when vaccines had bad reactions.

Because woman don't know how to get what they want without making threats.

They also never seem to remember that abortion is not supposed to replace birth control. There are tons of available and affordable methods to not get pregnant when having sex, even without killing your child.

Couldn't crack it as a whore? Try being something even more useless and talentless, become a youtuber.

Boycotting these people is fairly easy.

I've been doing it my entire life

Markiplier... lol where most of his audience is male.

what happened to pewdiepie?? he dropped off from the face of earth. i dont watch him or anything, never did. Last time I heard was that he was neutral or based.

Became irrelevant because he doesn't make over the top reactions for the kiddies anymore.

they got to him

A woman is biologically designed to serve, seethe whores

So many people are mad that they now have more freedom of choice.

Lol what a bunch of losers

Yeah, I agree. It's too bad you fucking didn't. You promised that you would have vengence and violence on anyone who didn't get all of the injections you demanded, regardless of religious exception, regardless of doctors recommendation, and regardless of whether anyone was sicke or even likely to be sick. You didn't fucking care, you demanded camps, blacklisting from industries, closing thier businesses, taking thier kids, and shutting down their bank accounts. Now you pretend to give a half-shit about bodily autonomy?

Alito didn't go as far as Thomas did, but he made a succinct point: Abortion is one of the few medical procedures that 100% ends life. That's not up for debate. The fetus is alive. It meets all the characteristics of a living organism. It is not a parasite, as no offspring is. It is human life, even if you don't think of it as a human person in a legal sense.

I believe the exact words you said to us when you told us you'd have us arrested and put into camps if we didn't get a vaccine were:

if it saves just one life

Well, banning abortion (which the court didn't even do) might just save one life, so kill yourself instead of the baby. If you have a problem with that, come back to me with an explanation of what bodily autonomy from gubernatorial fiat actually looks like.

This doesn't have anything to do with that, but do you really think it's more cringe than your Queer Nationalism where you keep engaging in sex acts in front of kids?

So the supreme court wants us all dead huh?

No, they just want the Republic to operate as one, instead of a judicial monarchy.

There is no equity in a society where being born a woman is born means having to accept a life of forced servitude.

First, shut the fuck up TERF. Women aren't born, stop being transphobic. Second, equity never exists in reality because it's literally impossible, and your dictatorship of progressive Lyncherdom wouldn't want it if it were offered. We're not people to you, so I don't want to hear you bitch about universal values. Third, no one actually forced you to have a kid, you just decided that the consequences of unprotected sex was something you could murder away.

You will restrict your path in so much as you don't generate victims. In the end, the lives you extinguish are your victims, plain and simple.

Moreover, whether or not motherhood is a burden or a gift is a choice YOU make. Motherhood isn't inherently one or the other. You choose to see it as a burden. That's why you kill your kids. Forget abortion, that's why you murder kids. You see them as a burden rather than as something that's actually valuable.

backwards notion that women shouldn't be allowed to be in control of their own bodies.

It's not your body the Christians are worried about. It's your victim's.

God I wish the supreme court wanted women dead. It might actually take a few steps forward and compromise on "able to handle some slight discomforts on the daily basis."

I don't think a single one of these people have had any insightful or interesting content in their entire "career", so I can't say I'm too concerned with their misguided opinions.

It should be a crime to conflate abortion with women's rights.

How about state those comments in your videos instead of bitching on Twatter? See how far your audience likes them.

Subhumans the lot of them

I'm not a Christian, but 'Christian nationalism' arguably made every good thing in the last 500 years happen.

And that includes the abolition of slavery.

No other group on earth would have done it.

Has Mark always been this much of a prick or is that a recent development? Because this kind of behavior from him is genuinely surprising to me.

I think worshipping women and marriage like cucks is pretty cringe.