KotakuInAction2
Communities Topics Log In Sign Up
Sign In
Hot
All Posts
Settings
Win uses cookies, which are essential for the site to function. We don't want your data, nor do we share it with anyone. I accept.
DEFAULT COMMUNITIES • All General AskWin Funny Technology Animals Sports Gaming DIY Health Positive Privacy
86 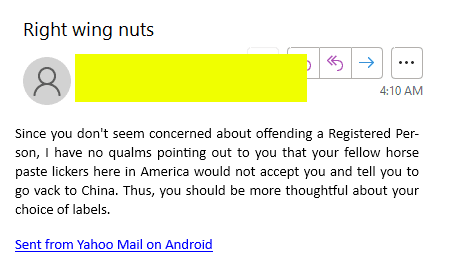 In another e-mail, he also claimed that the rest of the right secretly hates him for being Asian.

More projection, I think. Only the right has not hated on me for being a minority.

I don't like him because he swatted at least twice. One of them resulted in a dog being shot and killed by police. When he was told about that on a stream, he laughed.

While he may have switched political sides, I don't think he's changed much as a person since he was hanging out with Quinn.

Why would anyone care at all about offending a pedophile? A racist pedophile at that.

I approve of racism. it is sensible and ethical.

go back to china

Lots of pedos feeling cocky enough to out themselves.

I hope some un-corrupted LEOs (not you, FBI) are making a list and checking it twice.

Horse paste licker here. Would happily pose with Cheong at this dudes lynching in Minecraft.

Take what Ian says with a grain of salt, this could be faked. IMC was and still is a lefty but he's a good grifter and swatted people.

4am huh? I guess doing your sleeping during the elementary school hours is pretty effective at preventing temptation...

Like the old joke. What's the worst thing about being a pedophile? Eight p.m. bedtimes.

I think it's 4 AM Malaysia time. So about 12 hours difference or sometthing.

you shouldn't be alive. be glad you're just known as a sex offender.

Pedos are being more brazen and knows that they gonna get accepted soon by force. And... they probably are right. In less than 10 years, theyll be a protected class cause our children becomes adults and got brainwashes into supporting/promoting this.

The government is to blame for people needing to buy veterinary crap to self medicate the virus.

A registered person? WTF? You’re a CHILD RAPIST. IM NOT AFRAID OF OFFENDING YOU, I WANT YOU DEAD. DEAD.