KotakuInAction2
Communities Topics Log In Sign Up
Sign In
Hot
All Posts
Settings
Win uses cookies, which are essential for the site to function. We don't want your data, nor do we share it with anyone. I accept.
DEFAULT COMMUNITIES • All General AskWin Funny Technology Animals Sports Gaming DIY Health Positive Privacy
62 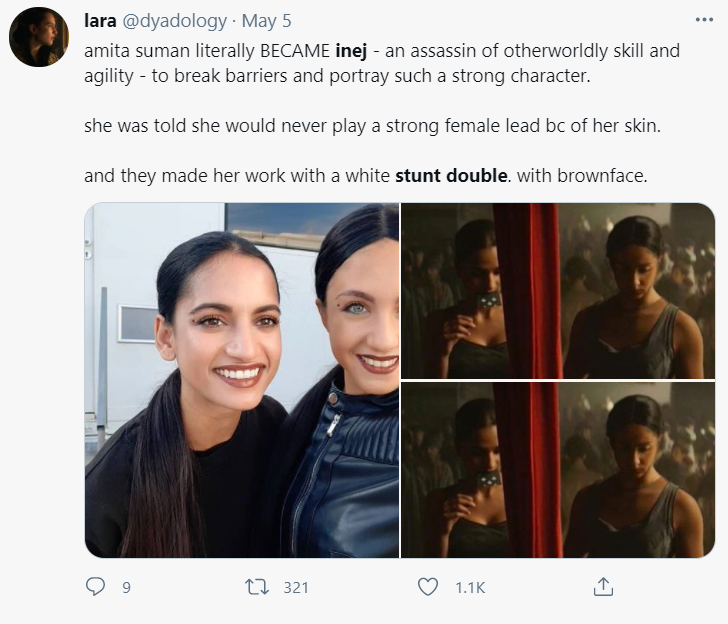 Probably was told that, by a fellow brown person.

It''s hilarious isn't it? Anyone with an IQ above room-temp knows that this was never said. Christ, Non-White women were playing strong female roles in movies before this turd was even born.

The background info:
In this show they needed a stunt double who could perform aerial silks. They filmed in Hungary, my country. Retards claim there MUST have been gypsy stunt women who can do this very specific art. Right.
Which is doubly retarded, because the character is based on gypsies, BUT the actress is from Nepal. She herself is "appropriation".

Also, remember the time a black stuntwoman died because they forced to do a thing she was not trained to do??

EDIT: they are also hunting for the Hungarian stunt coordinators now. Fucking brilliant.

They care about perception not reality. As long as what they want to be perceived is accomplished then reality can be ignored. Crying illegal aliens, Syrian dust baby, weather events pushed as climate change, Covid deaths having an average of 4 comorbidities, etc. The way events are perceived are more important than the events themselves.

Ironically all that matters in the film is perception not reality. So a little brown make-up does the trick!

I wouldn't be surprised to learn that there are zero gypsy stuntwomen in Hungary.

Real trad gyps are scaredy as fuck, just saying. Anything happens, they holler and freak out about dying.

Creatures that fake distress don't do it because they're afraid, they do it as a distraction - like plovers faking a broken wing to protect their nest - or to extort benefit - like soccer players taking a dive so they are awarded a foul.

Wait so they're searching for a gainfully employed professional gypsy stuntwoman?

"Literally" is meaningless now, like "racism," "nazi" and "transphobia."

The actress LITERALLY BECAME AN ASSASSIN. Why ain't she in prison, tho?

She must be a liberal.

If she's literally an assassin of otherworldly skill and agility then why does she need a stunt double at all? Hmmm.

The days this shit is regarded as a bad thing is when cinemas will recover.

I wouldn't know, I didn't watch it.

Anything mentioning strong female leads is an instant skip.

You're not losing out. Based on a YA series with Mary Sues, love triangles, scenes of the main girl going through a montage of beauty treatments... The show includes turning whites not white, heterosexuals gay, etc.
It's not worth your time, you are too male, too old (I don't know your age, but you are over 13) and too intelligent for it.

It should be. It used to be quite nice when "girl power" wasn't the whole point of it, e.g. Eowyn and the Witch-king. But they've pushed it so hard that it's hard to see it now without projecting modern-day nonsense onto it.

You're agreeing with me? Someone get the camera.

What's the point? We're never going to get both of you to smile, much less at the same time :)

Eowyn and the Witch-king

Eh, even at the time, that was pretty cringe inducing. "I am no man." It was pure stupid girl power. Same with all the Arwen crap.

One annoying part of this who "strong female lead" propaganda is that from 1904 until around 1964, "strong female leads" were very common, even standard, in American movies. Anyone here ever heard of, a century on, Mary Pickford, for heaven's sake?

All through that time It was very common to have Westerns where there was a female cattle rancher, a female who ran the saloon and was secretly organizing stage coach robberies, female timber cutter or mine operators. Perfectly normal.

It was similarly the case for crime movies, in film noir, in melodrames, romances, and so on. Women like Marie Windsor and Ida Lupino were very often the lead actor in stories, overshadowing the men both in story importance and in screen time.

Has anyone ever heard of a little film called "Gone With The Wind". Strong female leads, anyone?

I could easily list one hundred women who were major stars and leads in US movies over the period mentioned.

It was only in the mid-1960s, coincidentally with the rise of feminism, that these types roles very quickly started to disappear. I do not know why, but I think that it was no coincidence that that was also the period that saw the end of the Studio system, the decline of the objective - yes, objective - quality of movies and the triumph of television.

Anyway, my point is, just like every other kind of history,the world of woke knows no film history.

Thing is a strong female lead back in the day was.... still for all intents and purposes a female and it made sense. Doesn't mean they were not sometimes doing some rough and tough stuff, but they still seemed like women doing those roles.

Now adays in most cases a "strong female lead" just means a woman pretending to be a dude and they are basically interchangable.

That is what always got me about feminism.... if you really break it down most feminism is actually a celebration of manlyness weirdly and just forcing women to adopt male traits.

It won't because even when its not intended, beta simps will create it.

See, Resident Evil 8 where one of 5 Lords was a tall woman, and she instantly became the only thing anyone cared about the game because "tall mommy uwu." And they are already pissed because, as she is the first boss, she is gone for 80% of the games runtime.

Probably true. Kind of a depressing thing to think about.

Funny enough, that meme is why I never touched that game, despite my backlog being clear and Epic dropping garbage updates. I've only really been playing F1 lately anyway, I want to enjoy the 2020 edition while it's still the latest, as 2021 is made by the matriarchy's propagandists (EA) and will no doubt be shit. They've already announced a story mode, that literally nobody asked for, with an unlikable white male antagonist.

It doesn't surprise me that people bought a game because of a meme and then complained that the meme wasn't the whole game. They build unrealistic expectations that would ruin the entire idea, and demand it anyway, because everything is better with female characters everywhere, especially when they can act as a proxy for their fucking OF waifu, or in the case of women, for their murderous sadist fantasies.

I mean, if the game is up your alley its a solid enough game. The game was complete before she became a meme, so in the game itself she is barely dwelled on. Heisenburg is the lord with the most focus, and he is a straight up badass dude.

Honestly, I've bought plenty of games for the memes, but never full priced ones, and usually I temper myself to "was this designed for the meme?" (like Hatred many years ago). Getting mad about your own hype not equaling reality is incredibly stupid. Which is why I still laugh at people calling Cyberpunk "worst game ever, unplayable mess."

There's tall women and then there's Lady Dimitrescu...she must be 12 foot tall...:D

Just finished it...seriously easy game and I'm way past it at playing games.

She's 9'6, Capcom came out and told us to try and milk the popularity.

And yeah its pretty easy, I only died to two insta-kill setpieces and then the final boss once. But I don't think horror games need to be hard.

Brown face? White people should be prohibited from going to the beach, as that culturally appropriates my skin color.

Don't give them ideas.

They're already running with it.

I wish. The destruction of civilization is one thing, but if people can't go to the beach, then people may finally have had enough with this woke BS.

I always knew you were a brownie. Fucking BIPOC in our midst.

Every European is 'BIPOC' - either indigenous or Person of Color.

That's why it is such a great term.

Look, just like when the British say "Asian" or American says "African-American" we all know what it really means. Sorry Japanese dude and Elon Musk, you ain't. I don't make the rules.

Look, just like when the British say "Asian" or American says "African-American" we all know what it really means. Sorry Japanese dude and Elon Musk, you ain't. I don't make the rules.

It's always good to force them to make explicit what is implicit.

What, I thought you loved my beautiful, golden hue.

The colour of her skin?

More than a little AOC resemblance.

The stunt double was white.

SJW's: "This is confusing...can someone tell us whether we should be offended?"

when the stunt double is more attractive than the actress

yeah, no, you get to complain about blackface again after you collect trudeau and northam's scalps.

until then, you be quiet.

I'm all for identity-based hiring in stunt-work over charged, racist statements like "the best person for the job". This is the one olive branch we should give them, because eventually we'd no longer be having the argument.

It's also funny how you could complain that it's racist when your minority has top-billing in the film and the "oppressive" one risks their life to be found deep somewhere in the credits, and digitally half-erased at best.

AOCs, not good enough to qualify as retards.