Win / Gaming
Win
Communities Topics Log In Sign Up
Sign In
Hot
All Posts
Settings
Win uses cookies, which are essential for the site to function. We don't want your data, nor do we share it with anyone. I accept.
DEFAULT COMMUNITIES • All General AskWin Funny Technology Animals Sports Gaming DIY Health Positive Privacy
64 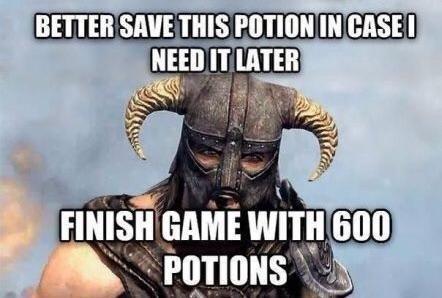 "My party member just died. I have 99 Phoenix Downs. Should I use one, or restart the boss fight? Obvious answer...(clicks reset)"

I love how Skyrim still have memes 10 years later. It probably is the best game ever made.

I have a friend who has purchased it for multiple platforms since it was released and has put probably a couple of thousand hours into it because once or twice a year he gets the itch to play Skyrim again. It's a game that's never the same twice, and it has a strong modding community. Those have helped keep it alive for so long.

It's definitely singular. Like it's the best at what it is. I've put tons of hours into it.

Who doesn't want to be a nord?

Skyrim belongs to the Nords.

Carrying capacities ruin games in my mind. One dungeon inevitably has too much crap. Just remove the capacity and set a limit on the number of similar items spawned in an area so the player can't crash his game with a million cheese wheels.

Unless you want to master your materia. Then you need to give up your elixirs to the Magic Pots, which give you 1000 AP.

Where the eff did Lydia go? Grrrrrr

Oh yeah, I remember her sarcastic tone when she said "I am sworn to carry your burdens."

I just wished I could have replied "How about a little less fucking attitude, Lydia?"

I appreciated the sass but never missed her once Serana showed up. I hope PC mods made her marriable. PS here.

My first character ended up marrying Mjoll the Lioness. I liked her "don't give a fuck" attitude and I thought she had a sexy voice.

I married her once Lydia went away. Ha!

Is there some other game where you end up carrying unused wedges/wheels of cheese?

Skyrim, of course. It's been a joke among Skyrim players for years how you always seem to have a ton of cheese wheels sitting in your inventory.

I also seem to recall that cheese wheels were a pretty common food in Mount & Blade, but I haven't played that game in a few years.

Can someone please explain to me the seemingly unnatural hype for dragon quest games? I played 8 almost to the end and kept waiting for my characters to become a tiny bit more powerful then they were at the start of the game. It's so damn boring, yet they literally shut down Japan when a new game from the series launches... Why?

It's a game for purists, you either like that style of game a lot or you don't like it. I like grinding believe it or not. Dragon Quest has pretty much stayed like it was back in the 90s and I like that.

Can someone please explain to me the seemingly unnatural hype for dragon quest games? I played 8 almost to the end and kept waiting for my characters to become a tiny bit more powerful then they were at the start of the game. It's so damn boring, yet they literally shut down Japan when a new game from the series launches... Why?

Can someone please explain to me the seemingly unnatural hype for football games? I watched one almost to the end and kept waiting for the players to do something a tiny bit more interesting then they did at the start of the game. It's so damn boring, yet they literally skip over my regular TV show when a new game from the series starts... Why?

That doesn't explain what you enjoy about Dragon Quest, but whatever. You're part is some elite group that gets it... Well done.

Also (and I don't even like football) there's a major difference from shutting down your country, and scrubbing programming on television, especially in a time when people are moving away from cable and scheduled programming. Not to mention Football has been popular for generations, has leagues from pee-wee, to highschool, college, and professional. Also, sports in general do this. Football(soccer) outside of the US is extremely popular and causes the same issues (but doesn't force a whole country to shut down). Besides that, in my opinion Dragon Quest is INCREDIBLY boring from the story, to the monsters you catch, to the combat. It's mundane. Finally every game in the franchise is a carbon copy of the previous game with different characters at the helm, yet somehow it's release causes a day in Japan to shut down it's economy... Baffling.

I started using items freely. No No Kuni gave limited MP pots, and money as you start out. So you couldn't heal your party after every battle, use MP pots to replenish, then buy more MP pots in the next town. Which required me to use my HP items, be more cautious in battle, and utilize my spells. Crazy concept, I know.

Better to have, and not need, than to need, and not have. Franz Kafka https://www.azquotes.com/quote/352969

SMT4A somewhat solved this problem by limiting how much you can carry for each item. For example the healing item that heals all HP/MP you can only carry 5 but you’ll encounter the item more than 5 times.

I'm a packrat in real life and I'm one in the games too...

My wife has heard, "I can't get rid of this, I might need it later," many times.