Conspiracies
Communities Topics Log In Sign Up
Sign In
Hot
All Posts
Settings
Win uses cookies, which are essential for the site to function. We don't want your data, nor do we share it with anyone. I accept.
DEFAULT COMMUNITIES • All General AskWin Funny Technology Animals Sports Gaming DIY Health Positive Privacy
46 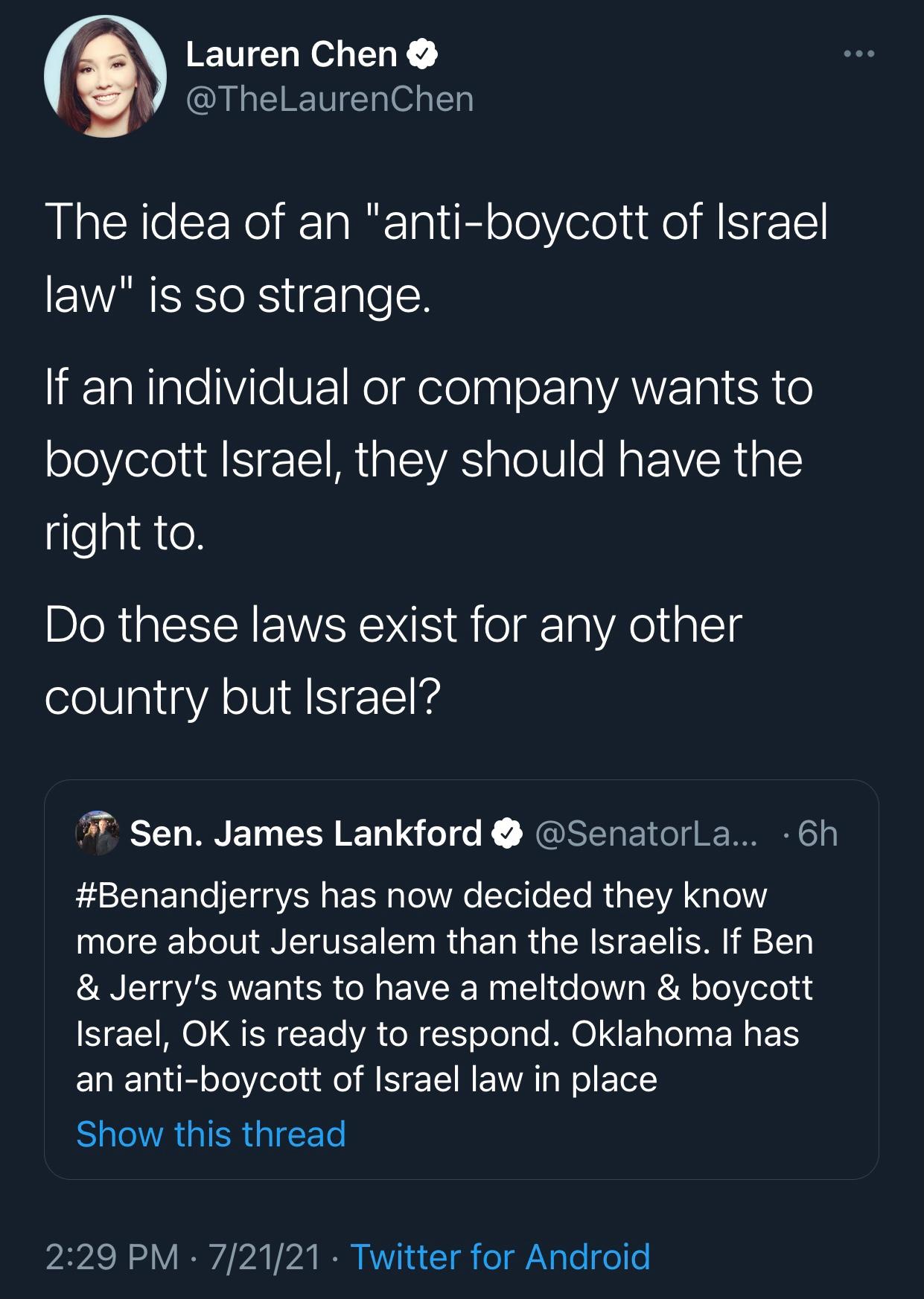 Even the gesture is enough to condition future pols and citizens that they are suppose to appease.. that is the scam as much as the actual act

Sure they can.we found that out with obamacare

Lankford's statements seem to be referring to a bill that was passed in Oklahoma in May 2020 that declares Israel "a prominent trading partner of the State of Oklahoma" and "that the state, and those companies that do business by and through the state, in the interest of the state's economic policy, should not boycott trade with Israel."

The bill, signed by the governor last year, also says that the state "shall not adopt a procurement, investment or other policy that has the effect of inducing or requiring a person to boycott the government of Israel or its instrumentalities, or to boycott a person doing business in Israel or territories under its jurisdiction, when such boycott is on the basis of such person's location in such places."

However, state Rep. Mark McBride (R), one of the primary authors of the bill, said that this law only applies to the state of Oklahoma and who they do business with.

"If Ben & Jerry's was a vendor [of the state], then we would not do business, but they are not a vendor of Oklahoma," McBride said to The Hill.

Just boils my blood, losing a constitutional right because of zog. Sickening.

Because jews are in the process of overthrowing the constitutional republic and implementing global oligarchy. They need to maintain Israel as their safe haven to flee to if they get caught.

I can't wait until this faggot gets primaried.

To be replaced by another installed puppet or someone to be crushed by the system. Come on man.. get with the time. THE SYSTEM IS BROKEN

Probably. I've looked into the dude who's running against him and he seems decent. I still have faith in our local elections though and I genuinely despise Lankford.

I'll continue to vote until the shooting starts. It's a tiny inconvenience and costs me nothing since my polling place is on my way to work. If voting doesn't matter then I'm barely affected, if it does matter then my vote is counted and I've done what I can do.

Keep voting until the shooting starts.

That is a wise dogma per state of things. Ayh guess aym too far gone to think about voting anymore.. but your stance is sound.