Win / Conspiracies
Win
Communities Topics Log In Sign Up
Sign In
Hot
All Posts
Settings
Win uses cookies, which are essential for the site to function. We don't want your data, nor do we share it with anyone. I accept.
DEFAULT COMMUNITIES • All General AskWin Funny Technology Animals Sports Gaming DIY Health Positive Privacy
44 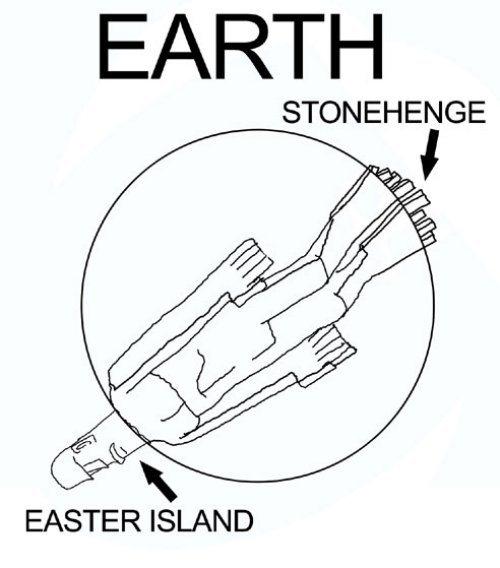 Yes. This is the primary tactic for discrediting information. You don't just call the missing 18 minutes a conspiracy, you create a much crazier version that all of space is fake, and then call that a conspiracy theory.

You don't just claim that a well known not-so-secret society is totally not up to no good, you claim they are actually run by lizard people and then call it a conspiracy theory.

You don't cover up your secret bases and experiments at the south pole, you claim they are hiding a portal to the underworld and then call it a conspiracy theory.

You don't claim video footage of your experimental plane is fake, you call it a UFO and then call it a conspiracy theory.

You don't claim the CIA doesn't assassinate people with a poison dart gun, you call it a Heart Attack Gun and then call it a conspiracy theory.

You don't claim your scientists were not talking about dark rituals and opening portals to other dimensions, you claim they might cause a black hole and then call it a conspiracy theory.

You don't claim 5G won't be used to track people like farm animals, you initiate a global campaign against the conspiracy theorists saying it's bad for your health. (It may be that too, but it's the tracking systems they don't want people talking about.)

You don't hide that people have openly talked about depopulating the planet via a vaccine, you focus on discrediting the one guy who claimed they caused autism and then label everyone an anti-vaxer no matter their concerns over complete lack of safety and efficacy.

You don't argue against natural remedies being superior to pharmaceuticals, you highlight a scam artist who sold people bleach pills.

You don't discredit the effectiveness of essential oils in a myriad of treatments, you sell it as a "cure for Ebola" to the third world, and then try to shut the entire industry down.

You don't sell people communism, you sell them fear.

I want this printed and framed.

Not familiar with the subject matter discussed with this one:

"You don't claim your scientists were not talking about dark rituals and opening portals to other dimensions, you claim they might cause a black hole and then call it a conspiracy theory."

Anyone have any articles on this?

CERN scientists were saying some really dark, cult like stuff about what they were going to do there. There's some video of rituals, their own propaganda videos are freaky and dark weird rituals, statue of Shiva the destroyer of worlds out front.

Media ran with "people are afraid CERN will cause a black hole!" which is pretty stupid and easily disproven. Never touched the freakish occult stuff that people were actually concerned about.

Thanks I'll look into that.

I could not have said it better. Thanks.

Had to search the missing 18 minutes, before my time, anyone reading this was give a rough explanation as to what is proposed to be in those 18 minutes, and how it would change things, fbi covering their own asses, if i had to guess

Yeah I got my conspiracies crossed there, meant to reference the missing tapes of the moon landing.

Geb and Nut - Egyptian tale of creation (same as the Mesopotamian Enki and Anu) https://duckduckgo.com/?q=geb+and+nut&iar=images&iax=images&ia=images&iai=http%3A%2F%2Fupload.wikimedia.org%2Fwikipedia%2Fcommons%2Fe%2Fe9%2FGeb_and_Nut03.png

And if we should even talk about Nasa... https://www.youtube.com/watch?v=MWWbzL8RTIo

If you think flat earth is real, you dont travel and you sont believe in real fact-based/observation-based science

What does travel have to do with it? You have never seen the curve if you say you have your mistaken.

Don't argue with a shill. We are better than they are.

Notice how this person remains as vague as possible. No proof of his claims. You should just ask for evidence. They have none, only their petty insults to try to brings us low to their level... :D The very fact that they are here proves that we are winning with truth and we have found a lot of truths!

Where is your evidence?

The earth is not a globe!

No it's not. And has never been shown as such. Its odd the people who saw flat earth is a hoax have never looked into it

:D This guy states the earth can be nothing but a globe...

Yeah it's not a globe. Or has never been proved to be such. Zero evadence. Same as the moon.

The wind probably kept knocking it down, so they had to make their hoax a bit more sturdy.

Nothing of Stonehenge in British literature as far as I know. Shakespeare never wrote about it.

I've been doing a little research and the earliest thing I can find so far is a reference to Stonehenge is in Henry of Huntingdon's Historium Anglorum , which was written in the mid 1100s. So it would appear Stonehenge has been around since at least this time.

It is possible that the tradition of setting up these rocks goes back to 1100s, point is that they are going to fall down when there is strong wind outside, that being why they got digged in and solidified the 50s. From what I remember you can also find similar stone structures (ruins) in Scotland, so to me it seems clear they been used in some religious ceremony by the Celtics, who worshiped stone.

Thanks for digging up some old references on it.

Why dont those rock structures in Utah fall down when there is a strong wind?

You have no idea how friction and mass works

Look, I clicked your link and at first I was shocked. I tried to discuss this with my gf, telling her that this is truth. Later she discovered some photos and thanks to her, I can clearly see the stones in the 1800s, there is a webpage on the restoration, it makes sense for occult sects to use it and that's why there are pictures of the masonic fanatics there.

That's my story of how I believed something and just by some digging, my gf protected me from the lie. Believe what you want, but we must rely on facts alone. How can you explain the pictures from 1800?

Current Stonehenge was built in the 50s, but it is not the first time they built this hoax. The stone probably kept getting knocked over do to strong wind, so they had to be digged in, which is what they did in the 50s. If a hoax worked once, they will repeat it.

The truest conspiracy theory ever.

Funny, but true. They are called hoax conspiracies. Flat earth is one. Morgellons may be one too, and I say that because the evidence show is absolutely unconvincing

Well for 1000s of years the round earth was a conspiracy conspiracy theory.